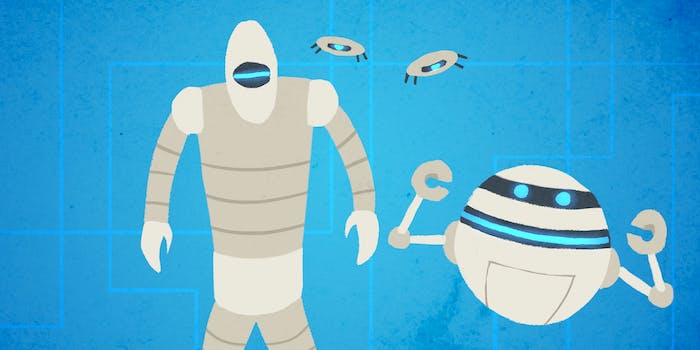 The technologies that will shape your future are already here

The future is here, whether you like it or not.

The pace of technology is speeding up and many of the companies driving innovation are using artificial intelligence and robots to solve everyday problems, reinventing our world as we know it. At TechCrunch Disrupt, the annual tech conference, this couldn’t have been more apparent, as AI and robotics startups showed off their new products.

Including robots that can do pretty much, well, anything from reading your emotions to having conversations and even helping you with your daily tasks. “When people first start interacting with the robot there is definitely some hesitation,” Melonee Wise of Fetch Robotics told the Daily Dot. At Fetch Robotics, the team is using robots and machine learning to disrupt warehouses. “The industry is very large and it’s ready for automation,” Wise continued.

The narrative around robots has largely been shaped by hollywood movies, but the perception that robots will one day take over the world, and take our jobs is one these startups want to change. “While the physical manifestation may be different there’s no difference between robots and computers,” said Wise.

Another robotics company that stood out is Affectiva, with emotion measurement technology that uses big data and facial recognition software to create algorithms that can be used to teach machines how to understand emotions. Affectiva CEO Rana el Kaliouby says the company is partnering with Giphy to bring their emotion detecting systems to the wider developer community. “We want to enable people to add emotional awareness to their experience,” said el Kaliouby. Any company that earns less than a million dollars a year will be able to use the startup’s Affdex SDK and APIs for free.

Robin is another highlight from the conference. The company is automating lawncare with its robot and the founders want to partner with lawncare professionals to provide easy payment options for their customers.

As robotics and AI continue to evolve, more companies are likely to get into the game and with the tools currently available developers are better positioned than ever to enter the robotics space. Uber has plans that they believe will lower the barrier to entry for new developers even more. Danny Lange the Head of Machine Learning says, the ride-hailing company is preparing to offer machine learning as a service to “help startups create better apps.”

Lange says Uber’s driverless cars are driving over a million miles every month, and gathering data that would be invaluable to tech companies big and small. “We use machine learning in our map generation,” he explains. “We are tracing information off of roadways on the routes you are taking and getting better etas,” Lange continued. Lange went on to describe a scenario where an Uber passenger requests a ride and is met right in front by a driver. “We want to use machine learning and AI to basically refine that experience.”

It seems like that has already happened, and for some service based tech companies perhaps this is a period of transition; a time to gather data before making any big moves. So if you’re wondering what the future of technology looks like, wonder no more, because we are living in it. It just might not look exactly like what you imagined.