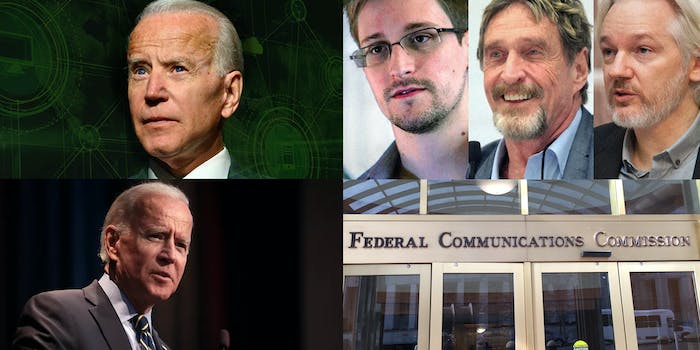 Tech newsletter: Will Biden EVER get around to the FCC?

‘We don’t want to lose any more valuable time’: Biden’s delay on filling the FCC pushes agenda back significantly

President Joe Biden has faced constant pressure to fill out the Federal Communications Commission (FCC) since he took office earlier this year. But he hasn’t, and now the calls for Biden to fill out the agency are growing louder.

There’s good reason for the latest push—every day Biden continues to leave the FCC unfilled, it pushes back any movement on a number of high-profile items the agency might take up, like restoring net neutrality rules.

The FCC was left in a partisan 2-2 deadlock after Republicans pushed through the nomination of Nathan Simington shortly after the 2020 election. But Democrats won the Senate races in Georgia, giving them a slim majority in the Senate and allowing any potential Biden pick to fill the FCC to have an easier path to confirmation.

But’s he’s been slow to fill the agency, and that delay is being noticed. In the immediate months following Biden’s inauguration, advocacy groups recognized that the incoming administration was dealing with the coronavirus pandemic and the aftermath of Trump’s administration.

But now, they say, it’s time for Biden to act. Because even if the president put forward a nomination today, its likely that some of the larger items on a Democrat-led FCC’s agenda wouldn’t be wrapped up before the middle of 2022 at the earliest.

While there is likely time for the FCC to accomplish those goals, the time it will take to begin working on them grows concurrently with each day Biden doesn’t announce a nominee.

“It’s taken an unusually long time and it’s been an incredibly unusual year, I think both of those things can be true,” Matt Wood, the vice president of policy and general counsel at Free Press Action, told the Daily Dot. “There is still time, but the rule making processes do take some time once you start them.”

Mark Stanley, the director of operations at Demand Progress, agreed and noted that he believed there was a general sense among advocacy groups that “now is the time” for Biden to make an announcement.

“I think there’s a belief that even with everything the Biden administration has had to deal with, now is the time. We don’t want to lose any more valuable time. Every day that passes that the FCC isn’t able to address some of these critical issues is a day we don’t have a fully fledged FCC to be an empowered advocate for people as opposed to letting ISPs get their way in Washington,” Stanley said.

There’s a good chance that you’re sweating your brains out of your skull. Summer is out in full force, but I’m keeping my sanity with this hands-free personal neck fan. Here are some of the fan’s features:

Cool Air, Fast: The fan’s arms bend in every direction, and the three-speed fan provides you with a light breeze or big gust of cooling air. It’s versatile: This fan charges quick through USB, and runs continuously for up to six hours. It’s even got optional multicolored lights for night time activities.

Goofy AF, but comfortable: Sure, it looks like something a stepdad would wear, but it’s no more uncomfortable than wearing some noise-canceling headphones. Did I mention it’s only $15? Don’t go dropping big bucks on a portable air conditioner that’s going to break after a few weeks. For the price of 6.27 McFlurrys, you can enjoy some serious relief from this overrated season.

Former NSA contractor and whistleblower Edward Snowden said in a tweet that Julian Assange “could be next” to die by suicide in the wake of John McAfee being found dead in a Spanish prison after the country’s national court had approved his extradition to the United States.

“Europe should not extradite those accused of non-violent crimes to a court system so unfair—and prison system so cruel—that native-born defendants would rather die than become subject to it,” Snowden tweeted, adding: “Julian Assange could be next. Until the system is reformed, a moratorium should remain.”

McAfee, founder of the anti-virus software company, had been facing charges for fraud and money laundry. He had spent months on the run and was captured in Spain in October. His death was an apparent suicide.

Snowden, who lives in Russia under asylum after leaking millions of classified documents to journalists and is wanted by the United States government, called for a moratorium on extradition “until the system is reformed.”

Assange also faces espionage and hacking charges in the United States related to information published on WikiLeaks about the wars in Iraq and Afghanistan. A U.K. court denied a request earlier this year to extradite the WikiLeaks founder.

The charges against Assange and his possible extradition have been a hot-button issue with some believing that Assange should be protected as a journalist, while others say he threatened the safety and American service members.

Biden’s infrastructure deal will include $65 billion for broadband

President Joe Biden announced that he has agreed to a compromise infrastructure bill put together by a group of bipartisan senators that allocates $65 billion for broadband spending.

The $65 billion is the same as the amount he offered as a compromise last month. It is also a far cry from the $100 billion he initially laid out in his first infrastructure proposal earlier this year.

It still remains to be seen what exactly the $65 billion would be spent on. Biden’s original proposal, while vague, did mention supporting community-owned or municipal broadband networks. Republicans have pushed against municipal broadband at both the federal level and state level.