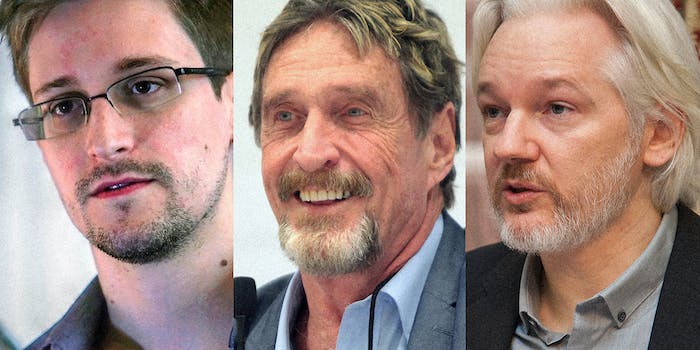 Snowden said the U.S. justice system was 'unfair' and needed to be reformed.

Former NSA contractor and whistleblower Edward Snowden said in a tweet Wednesday that Julian Assange “could be next” to die by suicide in the wake of John McAfee being found dead in a Spanish prison after the country’s national court had approved his extradition to the United States.

“Europe should not extradite those accused of non-violent crimes to a court system so unfair—and prison system so cruel—that native-born defendants would rather die than become subject to it,” Snowden tweeted, adding: “Julian Assange could be next. Until the system is reformed, a moratorium should remain.”

McAfee, founder of the anti-virus software company, had been facing charges for fraud and money laundry following his alleged involvement in cryptocurrency scams. He had spent months on the run and was captured in Spain in October 2020. His death was an apparent suicide.

Snowden, who currently lives in Russia under asylum after leaking millions of classified documents to journalists and is wanted by the United States government, called for a moratorium on extradition “until the system is reformed.”

Assange also faces espionage and hacking charges in the United States related to information published on WikiLeaks about the wars in Iraq and Afghanistan.

A court in the United Kingdom denied a request earlier this year to extradite the WikiLeaks founder, citing concerns for this mental health and the potential for him to commit suicide. In the judge’s decision, she also noted that Assange would face harsh prison conditions in the U.S.

The charges against Assange and his possible extradition have been a hot button issue with some believing that Assange should be protected as a journalist, while others say he threatened the safety and American servicemembers.

The United States will appeal the denial, the Washington Post reported.