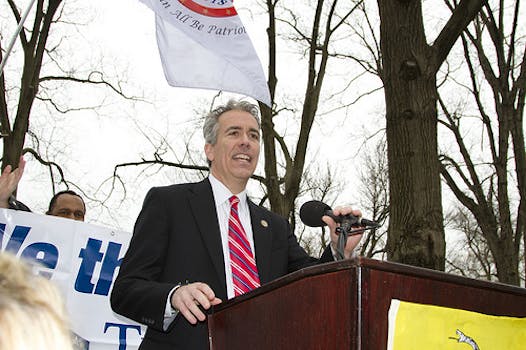 During a Cup of Joe event with his local constituents, Illinois Rep. Joe Walsh went off the rails for all of YouTube to enjoy.

There must have been something in the coffee Sunday morning.

During a Cup of Joe with Joe event, Illinois Rep. Joe Walsh went off on constituents who were blaming corporations and the banking system for the economic struggles facing the county.

“It’s not the private marketplace that created this mess,” Walsh yelled at an attendee, an event captured on video. “What created the mess is your government, which has demanded for years that everybody be in a home. And we’ve made it easy as possible for people to be in homes.”

Walsh was elected to represent the 8th Congressional District of Illinois in 2010 and rode to victory on the Tea Party movement, which heavily influenced the midterm elections. Walsh’s district includes the northern suburbs of Chicago.

The rant went on for more than two minutes and was captured by someone attending the event. The footage of the constituents meeting was first posted on YouTube in its entirety on Monday, and by Wednesday clips of the two-minute tirade were being re-posted by liberal bloggers.

During the rant, Walsh said he was “tired” and “pissed off” about people not realizing, in his opinion, who was to blame for the current economic crisis.

On Wednesday, Walsh released a statement in regards to the incident.

It will be interesting to see if and how the video plays into Walsh’s political future. Earlier this year, the state’s Congressional districts were redrawn, and there are three places the freshman representative could try and run for reelection.

A likely move, as reported by USA Today this week, would see Walsh running in the 14th District against another Republican, Randy Hultgren, who was also elected in 2010. A primary against Hultgren, who has a much more extensive political resume, could be tough for Walsh as he only narrowly defeated his Democratic opponent last year.

Until then, brew a cup of joe and enjoy this clip on more time.