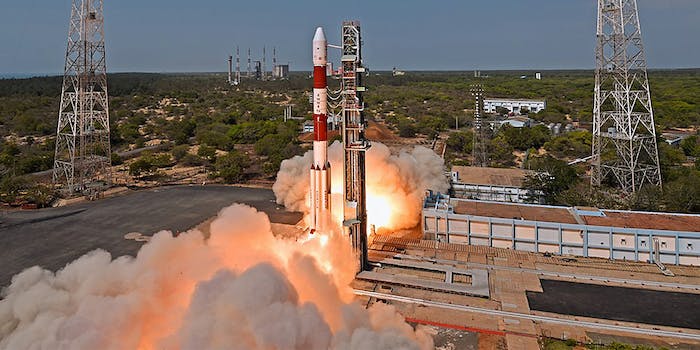 It may be the first case of an unauthorized satellite launch.

“It’s easier to ask forgiveness than it is to get permission” is a popular quote from early computer programmer Grace Hopper, and it’s one that many Silicon Valley companies take to heart as they push to disrupt the status quo. An enterprising Internet of Things startup seems to be the latest: After dismissing its satellite launch application a month prior, the FCC claims that Silicon Valley company Swarm Technologies went ahead and launched four tiny satellites into orbit anyway, aboard an Indian rocket.

IEEE Spectrum reports that among the payload of a Jan. 12 Polar Satellite Launch Vehicle (PSLV) rocket launch out of India were four satellites: SpaceBee-1, 2, 3, and 4. No operator was listed for the SpaceBees—just that they originated from the U.S. The FCC believes that the SpaceBee satellites belonged to Swarm Technologies and has now revoked the company’s next launch authorization. That launch was scheduled for April.

Swarm Technologies is a startup that focuses on intent-based autonomy and swarm robotics—a group of robots whose behavior is coordinated amongst themselves and their environment—but its founders have a background in aerospace engineering. Its SpaceBee satellite concept, detailed in National Science Foundation grant proposals and FCC applications, would act as gateways for the billions of internet-connected trackers and devices across the globe, particularly those in areas lacking in terrestrial wireless networks. Devices would be able to beam encrypted data up to the satellites, which would then be able to beam the data back down to internet-connected ground stations.

These data transmissions would happen about once per minute, with reportedly 1/10,000 of the mass and power used by existing communications satellites like Iridium, according to the company’s 2016 National Science Foundation grant. The system would also cost 400 times less than existing satellite systems.

However, their minuscule size was potentially problematic. The FCC revoked Swarm Technologies’ launch application due to safety concerns. Swarm’s satellites are tiny, smaller than a four-inch CubeSat, and the FCC believed this could make the satellites’ orbits difficult to track. This, in turn, could pose a safety threat for other satellites. At orbital velocities, a collision with another satellite would be “catastrophic,” Georgia Institute of Technology aerospace professor Marcus Holzinger told IEEE Spectrum.

Swarm managed to get its experimental satellites into orbit by using another company, Spaceflight Industries, as a proxy. SpaceFlight was unaware of Swarm’s situation with the FCC, as it’s the responsibility of its customers to get appropriate FCC approvals before launches. FCC approval is important because it marks compliance with debris mitigation guidelines and gives companies access to segments of the radio frequency spectrum for communications.

This may be the first time a private U.S. company launched satellites into orbit without a proper license, and it’s unclear what sort of punitive measures regulatory bodies will take against Swarm Technologies.