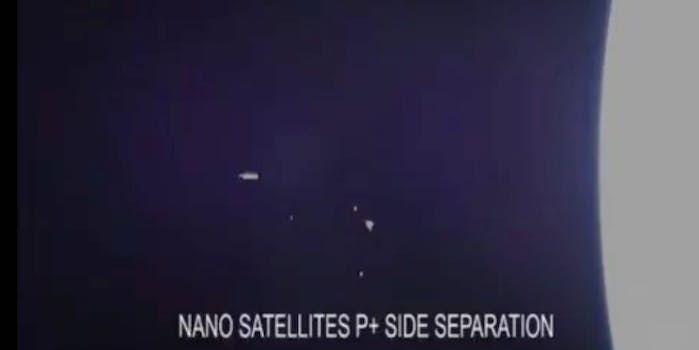 Earth-imaging company Planet Labs launched 88 tiny satellites into space this week, and like any proud parents they’re sharing video on the internet.

The launch was part of the biggest one-time satellite deployment in history, with a total of 104 satellites released at once from a Polar Satellite Launch Vehicle sent into orbit by the Indian Space Research Organization.

Planet Labs says all of its little satellites, called Doves, are now happily soaring through space, and will be fully operational within three months.

This is what it looks like when 88 #cubesats deploy from the side of a rocket into space. Fly free, @dovesinspace! pic.twitter.com/XUFnqpmQgL

Happy to report that all of the 88 Doves are happy, healthy, and rotating in real-time! pic.twitter.com/4xe8vWZnJr

According to Mashable, the Dove satellites will capture images of Earth to help Planet Labs track changes in real time. That includes monitoring things like deforestation and climate change. Planet Labs says the mission is the culmination of a five-year effort toward the company’s goal of imaging all of Earth’s landmass on a daily basis.

All right, little Doves, Earth’s ready for its close up.