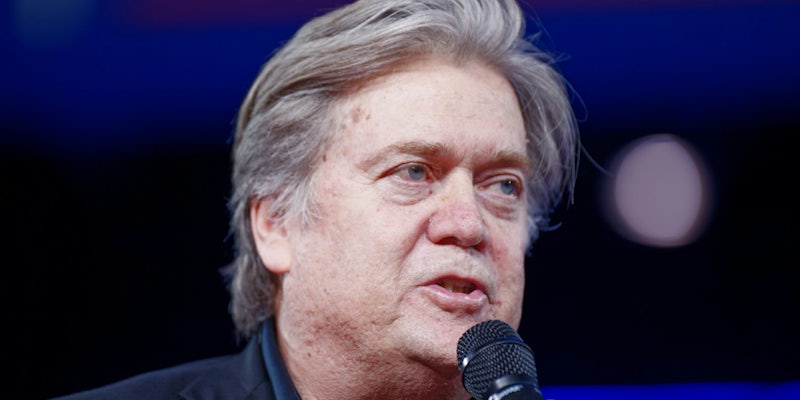 The former Trump administration official had a lot to say.

Steve Bannon, the head of notorious far-right website Breitbart and former White House chief strategist, gave his first interview since leaving President Donald Trump’s administration. He had some sharp criticism of his former boss, but also felt optimistic about the president’s future.

Here are some of the moments you may have missed in Bannon’s interview with Charlie Rose on 60 Minutes.

Trump fired former FBI Director James Comey earlier this summer and Bannon said if Trump had not sent Comey packing, the White House would not be embroiled in a sprawling investigation into Russian connections in the election led by special counsel Robert Mueller.

“I don’t think there is any doubt that if James Comey had not been fired we would not have a special counsel,” he said. “We would not have the Mueller investigation in the breadth that clearly Mr. Mueller is going.”

Bannon added that he did not believe Mueller should be fired and said the firing of the former FBI director could be considered the biggest mistake in “modern political history.”

Comey’s firing has sparked Mueller’s far-ranging investigation, including whether or not Trump obstructed justice by firing the head of the FBI amid its investigation into Russian meddling in the election and ties to the Trump campaign.

Rose and Bannon discussed Trump’s election victory in November and Bannon wasted no time toward pivoting to a favorite action of the Trump administration: bashing Hillary Clinton.

Bannon said populism has become a major idea among voters in America and the Clinton campaign was unable to tap into that feeling like her primary opponent Sen. Bernie Sanders (I-Vt.).

“Hillary Clinton is not very bright, everyone says she’s so smart, so much smarter than Donald Trump,” he said. “She doesn’t have a grasp on what’s important and what’s not—and that’s what’s essential in a leader.”

“The only question before us: is it going to be a left-wing populism or right-wing populism?” he said. “That is the question that will be answered in 2020.”

During the interview, Bannon took Rose to speak with Alex Marlow, the editor of Breitbart.

Marlow said news was “shaping the culture” and as a website, they choose stories they think will “resonate” with a “disenfranchised group of Americans.”

“We admit that we have a worldview,” Marlow said, as Bannon looked on, “which is populist, nationalist, grassroots conservative.”

When Marlow said he believed large news organizations such as the New York Times and CNN have their own world view, Bannon chimed in, calling them “elitist.”

4) Bannon says Democrats need a ‘civil war’ within the party

While Bannon’s website, Breitbart, has led a charge of radicalism within the Republican Party, the former Trump strategist said Democrats need a similar website to lead them forward and push for a civil war within the party. Some politicos have argued that this is already taking place in light of Clinton and Sanders’ primary election.

“The Huffington Posts and Rachel Maddows, they’re just cheerleaders for the donor class of the Democratic Party,” he said. “Until they vet that, until they have their civil war, they’ll never be competitive.”

Bannon said Sanders “did not have the guts” to take on Clinton during the primary.

Bannon suggested Trump’s historically low approval ratings were due to his inability to complete several core tenets of his campaign promises—including his border wall.

If he is able to focus on achieving those goals, Bannon said, Trump will win in “landslide” in 2020.

“If he continues to go down that path and punch out those promises he made, we’re gonna win in ‘18 – we’ll pick up six or seven Senate seats, I think we’ll pick up a couple seats in the House—and he’ll win in a huge landslide in ‘20.”

You can see clips from the 60 Minutes interview here.