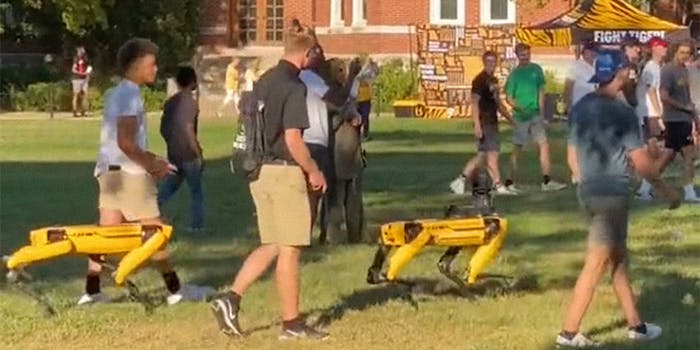 Spot, the agile, mobile, four-legged robot created by Boston Dynamics, has been turning heads in New York City and Honolulu. Now, it’s popped up in Columbia at the University of Missouri. The $98,400 robot was purchased by the school for its College of Engineering.

The robot dog made it to campus in late February 2021, but a video of it recently went viral on TikTok, receiving over 140,000 views after it was posted by @mary.hennessey. The video showed students walking alongside three yellow, four-legged robot dogs and is paired with audio from American Horror Story of Sarah Paulson screaming, “Help! The killer is escaping!”

“I took the video because I thought it was funny that they were running through our freshman Tiger walk,” Mary Hennessey, a freshman at the University of Missouri, told the Daily Dot. “They do kind of scare me because I’m not entirely sure what they are used for and why we have them.”

In the comments of the TikTok video, many compared Spot to the Black Mirror episode, “Metalhead,” which is based on Boston Dynamics and shows a post-apocalyptic future where robot dogs hunt remaining human survivors.

One comment from @k.k.__driftor that received over 1,300 likes read: “That episode of black mirror is not to be taken lightly.”

The robot has sparked backlash in cities across the country, especially when used by police departments. The concerns come from fear of mass surveillance as well as the militarization of police forces. On the Boston Dynamics website, the “About” section makes it clear that they will not partner with anyone who uses the robots to infringe on privacy or civil rights. The page also explains that they do not authorize the use of robots as weapons.

However, those statements do little to assuage a concerned public.

In New York City and Honolulu, the robot dog was utilized by the city’s police departments. Both cities received major backlash for their efforts, which led to the New York Police Department to cancel its $94,000 contract. In Honolulu, the police department spent upwards of $150,000 in federal pandemic relief money on its Spot. The robot was used in Hawaii at a government-run tent city to scan body temperatures and check for COVID-19 symptoms.

Eric Stann, a research news strategist at Missouri, said the College of Engineering has one Spot robot that was purchased by the school. Three additional robots were purchased as a collaborative educational experience by Ameren, a power company in Missouri

According to the Columbia Daily Tribune, the goal for engineering students working with Spot is to train it using a remote control, collect data on how it works, and write a program for Spot to operate on its own.

As of July, there are over 500 Spot robots in use across the country.