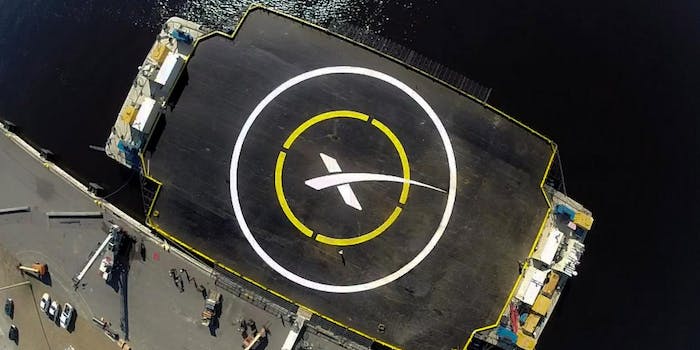 Today in its second attempt to forge ahead into a crazy-like-a-fox future of space flight, SpaceX attempted to land a first-stage rocket back on Earth after sending it heavenward. While SpaceX succeeded in hitting its target—a floating drone barge off the coast of Florida, the first stage of its Falcon 9 rocket again landed hard enough to render it unusable the next time around.

Ascent successful. Dragon enroute to Space Station. Rocket landed on droneship, but too hard for survival.

The first report out of the launch bubbled up on Twitter, painting a vivid mental image of how that whole hitting a literal moving target with a 200-foot-tall rocket thing went down.

While no footage of the rocket’s crash-ish landing had made it online yet, SpaceX appears to have avoided the issues that plagued the rocket’s fins and fine-tuned positioning the first time around, resulting in a not-yet-soft but more upright—and perhaps less Vine-worthy—landing.

Meanwhile, SpaceX’s Dragon spacecraft appears to be doing just fine on its critical mission to caffeinate the International Space Station.

.@SpaceX #ISScargo mission – solar arrays have deployed & #Dragon is on its way to the @Space_Station! pic.twitter.com/CiP7g2KBWT