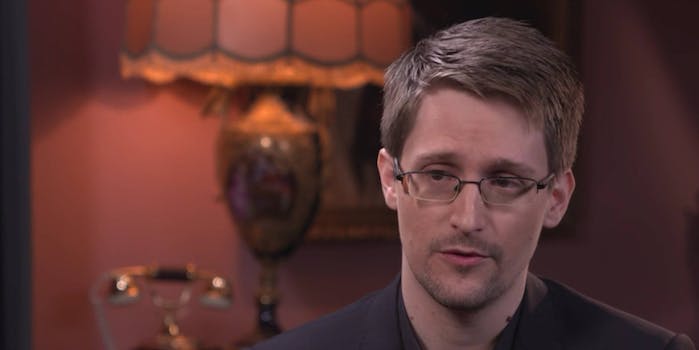 Edward Snowden has spent the last three years living under temporary asylum at an undisclosed location in Moscow, where he fled following his decision to leak documents relating to the United States’s surveillance programs. The impact on Snowden’s life has been obvious: He now lives in a self-imposed exile from his home country, fearing that he’ll be subject to severe prosecution (under the Espionage Act of 1917) in the American justice system.

This is the essential backdrop for Snowden’s exclusive interview with Yahoo Global News anchor Katie Couric, which is set to be released in full Monday.

In it, the 33-year-old discusses the “double-standard,” evidenced by top U.S. officials walking free following mishandling of confidential information. Specifically, he mentioned retired Gen. David Petraeus, rumored to be under consideration to be Donald Trump’s Secretary of State, and former Director of National Intelligence James Clapper, who lied to Congress about the government’s surveillance of American citizens in March of 2013 and was exposed by Snowden’s leaks months later.

NEWS: @Snowden to @katiecouric: Petraeus disclosed “information that was far more highly classified than I ever did” https://t.co/HF7CS8wD7d

When asked by Couric what a plea deal would even look like for him, if he were to somehow cut an agreement to return to the U.S., Snowden replied that while he wasn’t sure specifically, there were demonstrated instances of the government declining to charge officials (or doing so minimally) under similar circumstances.

“Perhaps the best known case in recent history is Gen. Petraeus,” Snowden said. “Who shared information that was far more highly classified than I ever did with journalists. And he shared this information not with the public, for their benefit, but with his biographer and lover for personal benefit. Conversations that had information, detailed information, about military special access programs, classified above top secret conversations with the President and so on.”

“When the government came after him,” he continued, “they charged him with a misdemeanor. He never spent a single day in jail, despite the kind of classified information he exposed.” Snowden then highlighted Clapper’s false congressional testimony.

“When we had the most senior intelligence official in the United States, Gen. James Clapper, who lied to the American people and all the Congress, on camera, under oath, in the Senate in a famous exchange with Ron Wyden, he wasn’t even charged. But giving false testimony to Congress under oath, as he did, is a felony. It’s typically punished by three to five years in prison.”

Couric asked Snowden if he was suggesting there was a double standard in place, and Snowden chuckled as he replied: “I’m not sure I’m suggesting it. I think everyone’s aware of it. We have a two-tiered system of justice in the United States, where people who are either well-connected to government or they have access to an incredible amount of resources get very light punishments, whereas people who’re from more vulnerable populations, they live in more precarious situations, they’re an inner-city youth, will be very much tread upon by our justice system.”

With the ascension of President Donald Trump less than two months away, Snowden’s situation looks even more bleak now. Trump has publicly called for Snowden’s execution in the past, suggesting to Fox News host Eric Bolling in 2013 that “in the good old days” he would’ve been killed and that the U.S. government “should get him back and get him back now.”

Snowden is a fascinating figure. And on the strength of this early excerpt, the release of Couric’s full interview figures to be a must-watch. His legal representatives have also reportedly lobbied the White House for a presidential pardon in the closing months of the Obama administration, although those requests have so far been batted down.

As Snowden laments the double standards that he feels are working against him, he’ll be entering an even more precarious phase of his life once Trump is inaugurated—not least of all considering the chummy relationship between the president-elect and Russian president Vladimir Putin, who wields more or less absolute power over the Moscow-based Snowden’s fate.