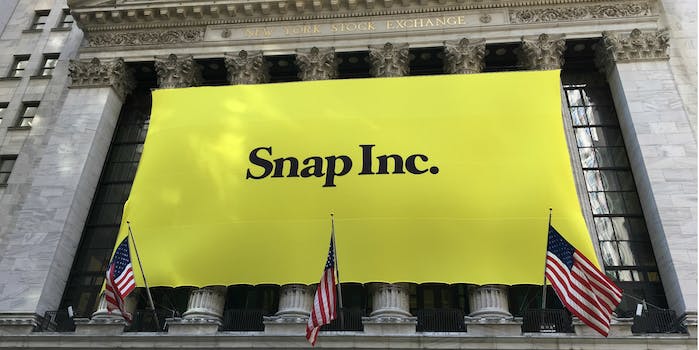 Snap’s shares plummeted moments after it released a troubling first quarter earnings report on Wednesday, its first since going public.

The company said it brought in $149.6 million, a 300 percent increase from last year, but well short of Wall Street’s $158 million estimates. Snap lost $2.31 per share, but was expected to only lose 21 cents. That’s very bad news for the ephemeral messenger.

Snap was flying high after completing a successful IPO earlier this year. Now its shares are down 26 percent to 17.19 (just above its IPO price) in the moments after it filed its earnings report. While its revenue is increasing, its losses are growing much faster. It spent $2 billion to pay out compensation for its IPO, and lost another $208 million during its first three months of 2017.

The social network argued during its earnings call that many of the teenage users it has can’t be reached by traditional television or print advertising, according to the Verge. It did not, however, compare its advertising efforts with other competition.

“We still have a lot of work to do, but I’m excited by the amount of progress we have made in such a short time,” said Snap CEO Evan Spiegel, on the call.

None of this should come as a surprise. The company warned its investors that it’s bleeding money and may never achieve or maintain profitability in its IPO filing.