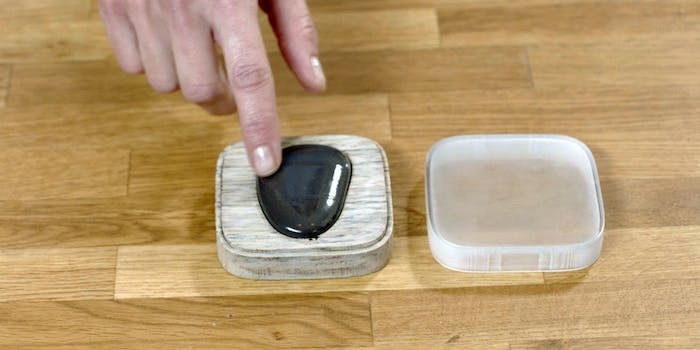 How Smartstones are forging new frontiers in human communication

From a simple stone, comes a great idea.

Technologist Andreas Forsland’s mother was visiting him in 2012 for her 70th birthday when she contracted pneumonia and was put on a ventilator. By her side the entire time, his mother communicated with Andreas by responding to questions with gestures and hand squeezes. “No one else could have that level of communications if I was not there by her side,” Forsland told the Daily Dot.

From that personal experience, the concept for a primitive yet intuitive language was born that became Smartstones, a product and platform that enables a broad range of non-verbal communication. The core principle behind Smartstones is the use of haptics, or touch-based actions such as taps or gestures. Using the sensors in Smartstones, people can create their own personal languages or provide a voice for those who lack the ability to speak. For example, a grandmother and her grandchild could set up a code where a double tap means “I love you.” For someone stricken with such disabilities as ALS or autism, the Smartstone becomes a means to send and share messages; the Smartstone can send data from stone to stone, from stone to text, or even stone to voice.

In 2013, Forsland took his basic concept of creating a non-verbal communications platform to a startup weekend. As the former Citrix executive recalls, his idea initially bombed. However, after running into a group of developers who suggested he use a stripped down cellphone as the communications device, the idea struck gold. Smartstones has raised an initial round of venture capital, and has an Indiegogo campaign whose goal is to sell beta versions of the product for an early test.

As with many tech breakthroughs, a lot of complexity lives inside the Smartstone—which is made from a Corian-like composite material. The guts of each stone include Bluetooth 4.0, an accelerometer and gyroscope, an audio speaker, a capacitive touch interface, and a gesture recognition library. Forsland explained that the first version of the product will use Bluetooth to send messages, while later versions will deploy low-power, cell-based telemetry. Each device has the capacity to recognize hundreds of gestures, but initially it will come with 12 preset gestures that you can modify to make your own, with two future iOS application libraries that can be used to build customized messages, one of which will be voice based.

Jon Stewart of Daily Show fame, is among those who were awestruck at Smartstones. In 2014, Stewart had David Rose, an adviser to the startup, as well as a researcher at MIT Media Lab’s Tangible Media Group, walk him through the benefits of the product. After some good-natured kidding, Stewart quickly understood the concept, even saying, “It’s a lovely way of humanizing technology.”

As with many big ideas built on simple yet extensible technology, the power is in the vision for Smartstones. While the first iteration will showcase its ability to create lasting interpersonal connections, its ability to provide a voice to the disabled is what could propel it from a clever use of messaging to empowering people who lack the means to express their feelings and share their needs.

Focusing on multiple target markets is a challenge and opportunity for CEO Forsland. Smartstones appear to be ready to tackle challenges as they come, beginning with a 2015 beta test. Through it all, Forsland goes back to the moment that led him to develop the concept behind Smartstones. It took a complex problem and found an approach that utilized existing concepts, expanding them and packaging them in a new way. The Smartstone founder sums it up succinctly: “The biggest ideas are those that are based on the simplest technology.”