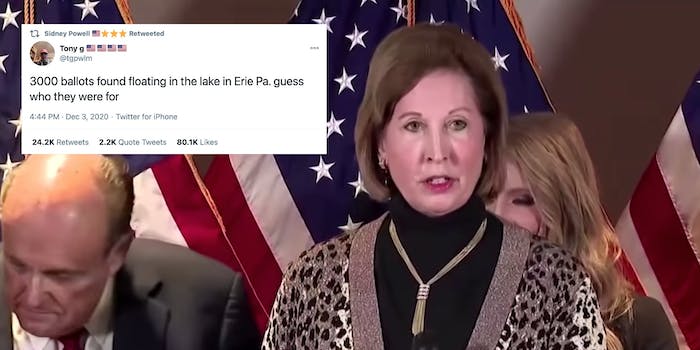 The claim originated on a satire news site that wrote about ballots for NBC's 'The Voice.'

Sidney Powell, the former attorney for President Donald Trump, promoted a fake news story on Twitter alleging that 3,000 ballots had been discovered in a lake.

The tweet, which suggested that the alleged ballots had all been filled out for the president, has since been shared nearly 27,000 times.

Although Powell was axed from Trump’s official legal team, the attorney has continued to spread countless debunked conspiracy theories alleging widespread voter fraud to her more than 1 million followers.

But as is the case with nearly everything Powell shares on Twitter, the claim is entirely false.

Incredibly, the fake news piece never even alleged that the fictitious ballots were for the election but instead for NBC’s singing contest The Voice.

As noted on one of the sites that carried the story, the New York Evening, a fake quote attributed to a “high-ranking official inside the Treasury Department” revealed the source of the ballots.

“The bag is full of ballots, sure, but they’re ballots for last season’s finale of The Voice,” the fake quote says. “We’re pretty sure that show has never actually had a real winner, so… why all the hubbub?”

The fact that Powell not only fell for a fake story but couldn’t even get the fake story correct is telling. However, Powell’s promotion of the ballot hoax is totally unsurprising given that her Twitter profile is filled with an endless stream of similarly false claims.

Powell also helped spread the false claim that a U.S. election server in Germany—run by one of several companies depending on the version of the conspiracy—was seized in a raid that resulted in U.S. special forces being killed by the CIA officers tasked with protecting it.

Despite repeated attempts to overturn the results of the election, Trump’s legal team continues to rack up losses in courts across the country.