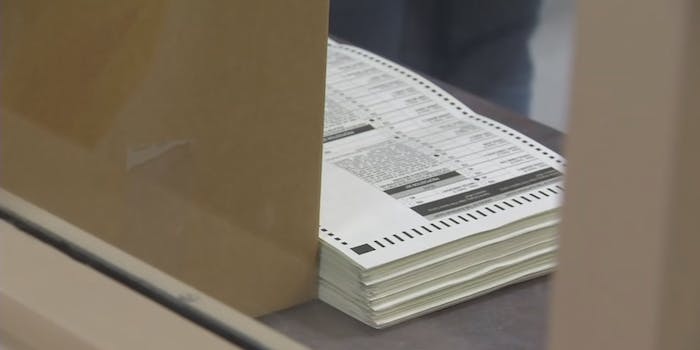 As detailed by the Daily Dot last month, a small Twitter account run by a German supporter of the QAnon conspiracy theory claimed without evidence that an Army raid in Frankfurt led to the seizure of a server belonging to Spanish election technology company Scytl.

“Something big is coming. The Spanish software company Scytl, which offers election manipulation software worldwide that was used in the USA, is right in the crosshairs,” an English translation of the tweet says. “The server for the manipulation was in Germany (Frankfurt). A rogue who thinks evil about it. Tonight the USA ARMY confiscated the surfers [sic] with a huge contingent.”

The tweet eventually made its way to Rep. Louie Gohmert (R-Texas), who referenced the claim during two interviews days later.

“I don’t know the truth,” Gohmert said. “I know that there was a German tweet in German saying that on Monday U.S. Army forces went into Scytl and grabbed their server. There are some that believe this is the U.S intelligence that manipulated all this to cover their own rear ends.”

Although Gohmert admitted he had no evidence that such a raid actually took place, the claim was quickly repeated online.

The story was ultimately amplified by George Papadopoulos, a former Trump campaign member who pled guilty to lying to the FBI, who repeated the claim as if it were confirmed to his more than 670,000 followers.

Only Papadopoulos made a mistake. Instead of mentioning Scytl, Papadopoulos instead alleged that fellow election technology company Dominion Voting Systems had been raided.

“Breaking: Congressman Louie Ghomert has stated that The U.S. Army has seized servers for Dominion in Germany,” Papadopoulos said.

Of course, no raid took place. Neither Dominion or Scytl have servers in Germany and all U.S. election votes are counted domestically. The army, Dominion, and Scytl all refuted the internet-created rumor.

But that did nothing to stop the conspiracy’s spread among Trump supporters desperate for any evidence of widespread voter fraud. The claim eventually made its way to Sidney Powell, a lawyer who was axed from representing the president after sharing countless election conspiracies online.

Powell, too, admitted that she had no actual evidence that such a raid had taken place and likewise botched the original conspiracy, which by that point had been altered countless times in an online game of telephone.

“I said I did not know whether they had been seized by the good guys or the bad guys,” Powell said in response to tweets claiming that she confirmed the raid. “Rumor was it was the good guys.”

The conspiracy shifted once again in late November after Trump supporters began claiming that the non-existent raid had actually resulted in the death of numerous Army members, who had allegedly been shot by CIA operatives tasked with guarding the server and it’s evidence of election tampering.

Conspiracy theorists online have even begun claiming that a helicopter crash in Egypt, which resulted in the death of five U.S. soldiers, was just a cover to hide that their deaths had actually taken place during the server raid in Germany.

That latest update to the false claim was picked up McInerney, the retired three-star general, who repeated the story during an interview with the conspiratorial Worldview Weekend Broadcast Network. When asked by the Military Times what evidence he had to back up the claim, McInerney responded with an exclamation-laden pro-Trump screed.

“President Trump won in a landslide and the Dems left so many footprints that this TREASON must be stopped!!!,” McInerney said. “This will be the last free election we have and I predicted it on 2 Nov on the Steve Bannon Show!”

McInerney—a West Point graduate who earned an assortment of honors over his long career in the Air Force, including the Distinguished Service Medal and the Defense Superior Service Medal—retired from the military and spent over 16 years working at Fox News as a military analyst.

McInerney’s fringe beliefs became apparent as time went on, ultimately leading to his firing from Fox News after he made disparaging comments regarding the torture John McCain received while a prisoner of war in Vietnam.

Waldron—the retired Army Col., who, according to his LinkedIn profile, currently works as a forklift driver and floor sweeper at a brewery he founded in Texas— has also become a central figure in election fraud conspiracies.

Waldron has appeared at numerous press conferences in recent weeks alongside Trump’s personal lawyer Rudy Giuliani where he has repeated many of the most prominent election conspiracies.

During a recent hearing in Arizona, Waldron even claimed to have seen technical evidence proving that U.S. election data had been sent to the mythical server in Germany. Waldron alleged that “white hat” hackers possessed “traffic and the packets” proving the conspiracy to be true.

Waldron also specifically refuted statements made by Chris Krebs, the former head of the Department of Homeland Security’s Cybersecurity and Infrastructure Security Agency (CISA) who was fired by Trump after debunking such conspiracies.

To date, Waldron, who has been presented as a cybersecurity and voting machine expert, has not provided any proof whatsoever of his claims. It also remains unclear what exactly the former servicemember’s background is in the cybersecurity field.

Bryson Bort, Senior Fellow at the R Street Institute for Cybersecurity and Emerging Threats, told the Daily Dot that he had never heard of Waldron.

An expert in election software and an Army veteran as well, Bort stated that Waldron’s role in the military is not one that “lends itself generally to being a voting machine expert.”

The Daily Dot reached out to the U.S. Army to inquire about Waldron’s service but did not receive a reply. Waldron did not respond either to repeated questions about his alleged experience with cybersecurity and voting machines.

But as the entire election server raid conspiracy has proven, facts and knowledge aren’t a prerequisite for becoming an expert on the pro-Trump internet.