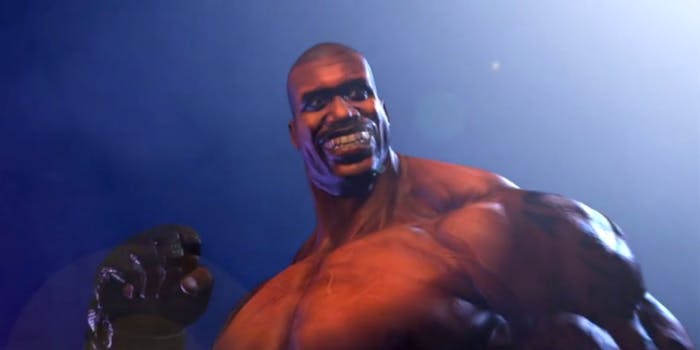 Shaquille O’Neal really wants to make up for how much his first video game sucked.

Let’s all agree, right now, right here, that celebrity crowdfunding campaigns are trashcan tripe that should be engulfed in wildfire and sent to No Thank You Island.

Crowdfunding should be a fundraising option for people who lack the kind of insider access or status needed to raise money from regular investors. It’s not supposed to be a way for celebrities to manipulate people into giving them money because they’re famous. You are a rich person. Don’t ask Normals for money.

That said, Shaquille O’Neal has a celebrity crowdfunding campaign on Indiegogo and we need to talk about it.

Shaq is trying to raise $450,000 to make a sequel to his much-hated 1994 video game, Shaq Fu. Shaq promises in a campaign video that Shaq Fu: A Legend Reborn will rehabilitate the Shaq Fu franchise by not sucking so much. To that end, he’s working with a new group of gaming professionals called Big Deez to produce a PC game that will right the wrongs of the original version.

Here’s the trailer for the resurrection of Shaq Fu:

To entice people to give him money—even though he’s trying to make a sequel to a video game so hated that there’s an entire website devoted to buying up all existing copies of the game in order to “prevent other generations from feeling the corruption of this game and its evil”—Shaq is using social media as an incentive.

For $500, he will follow you on Instagram in a program he calls “Shaqtagram.” And he will not be an idle follower: Shaq will both comment on and “like” photos. For $1,000, Shaq will follow you on Twitter and keep following you for an entire year. He will give a “shout-out” to his 7 million followers. So far no one has claimed these perks.

We are left to wonder why the legendarily large basketball player isn’t channeling his efforts into making a Kazaam! sequel.