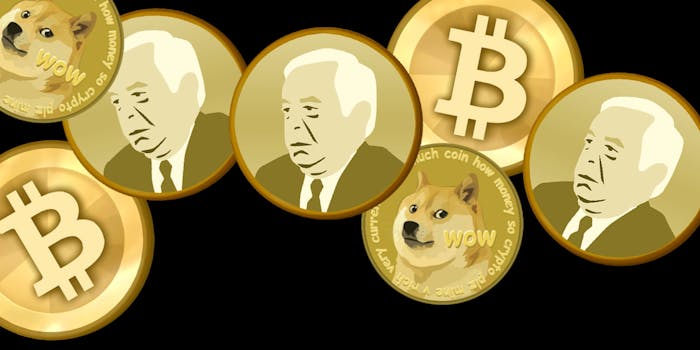 Senator asks U.S. to ban Bitcoin and all other cryptocurrencies

Senator Joe Manchin (D-W.Va.) is believed to be the first senator to call for an outright ban.

Senator Joe Manchin (D-W.Va.) has called for the U.S. to ban Bitcoin, and by extension all anonymous cryptocurrencies.

In an open letter addressed to U.S. regulators, obtained by Business Insider Wednesday, Manchin wrote his desire for them to “limit the abilities of this highly unstable currency.” He cited the usual host of complaints about Bitcoin: that it’s a favorite currency of online illegal activity and that it’s completely unregulated.

His primary concern, though, is economic, and that he doesn’t believe in its long-term viability. “I am most concerned that as Bitcoin is inevitably banned in other countries, Americans will be left holding the bag on a valueless currency,” he wrote.

A Manchin staffer told the Daily Dot that though the letter uses the word “regulate,” the senator’s intent is indeed to fully ban the use of Bitcoin in American trade. And while his office didn’t seem familiar with other types of cryptocurrencies, like Litecoin and Dogecoin, the staffer said that Manchin would have similar complaints about any such anonymous form of online payment.

“It’s the anonymous, unregulated nature of it,” that Manchin finds a problem, the staffer said.

The timing could hardly be better for a politicians who opposes Bitcoin. It’s has been awash in bad press in recent days, as once-prominent exchange site Mt. Gox mysteriously shut down, amid an allegedly leaked memo that admitted it had lost hundreds of millions of users’ dollars. Mt. Gox, based in Japan, was reportedly issued a U.S. subpoena in the days before it closed up shop.