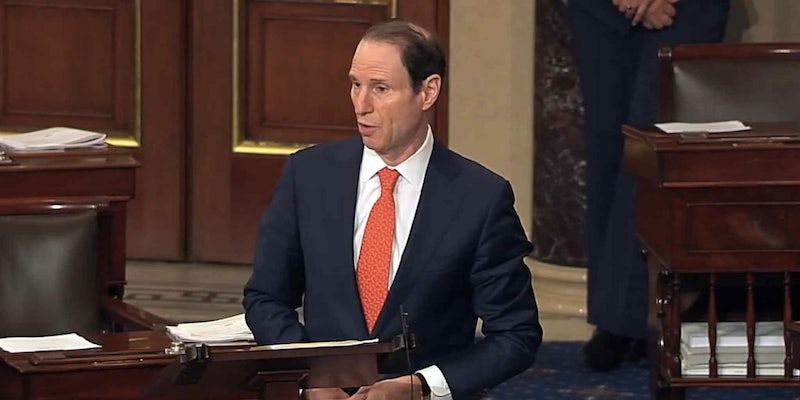 8 senators want to expose the secret courts that enable PRISM

A group of senators, including Ron Wyden (D-Ore.), have proposed a bill that could reveal how many Americans the NSA is spying on.

In December of 2012, a handful of senators fought to fix the law that allows for PRISM, the NSA’s vast Internet surveillance program that taps Google and Yahoo for communications.

They failed. But now that they have your attention, they’d like to try again.

In light of the public outrage about PRISM, eight senators have come up with a way to make public the secret courts that administer the program, which was reauthorized by the Foreign Intelligence Surveillance Act (FISA) less than two years ago.

Under the guise of covertly gathering intelligence on the U.S.’s enemies, FISA courts operate and approve surveillance requests in secret. They’ve existed since FISA was passed into law in 1978, and most recently were renewed for five more years at the end of 2012.

In light of PRISM, which was only revealed Thursday due to a press leak, those senators have created a bill to declassify Foreign Intelligence Surveillance Court (FISC) opinions.

Many of the new bill’s sponsors gave FISA its biggest recent challenge, fighting it before it passed the Senate on December 28, 2012. The seven democrats cosponsoring the bill each voted no (it passed 73-23); Mike Lee (R-Utah), who voted to extend FISA, is now angling to make it public.

Immediately before that Senate vote, three of the current bill’s eight sponsors introduced amendments to temper FISA. All failed.

Patrick Leahy (D-Vt.) tried to limit the extension to just three years, instead of five. Ron Wyden (D-Oreg.) wanted the NSA to specify how many citizens the NSA monitored. And Jeff Merkley, who helped author the current bill, tried to amend FISA to do the same thing: declassify its ruling.

A fourth proposed amendment before that vote, also shot down, came from Rand Paul (R-Ky.). That one was clearly to make a point: it would reiterate the Fourth Amendment to the U.S. Constitution, which prohibits unreasonable search and seizure. It’s unclear why Paul wasn’t part of the current bill from the beginning, as he has expressed consistent outrage about NSA spying. His office didn’t respond to request for immediate comment.

The bill is a natural fit for a senator like Wyden (D-Oreg.), one of the Daily Dot’s Top 10 Internet Activists of 2012. A longstanding member of the Senate Select Committee on Intelligence, Wyden formally requested to declassify FISA court opinions at least as far back as 2008. According to a timeline provided by a senior Obama administration official, Wyden was briefed on the program March 29, 2012; his office has since confirmed that claim to the Huffington Post. Since then, Wyden has formally requested at least four times that the NSA reveal the number of Americans it monitors.

“It is impossible for the American people to have an informed public debate about laws that are interpreted, enforced, and adjudicated in complete secrecy,” Wyden said in a statement Tuesday.

“When talking about the laws governing Intelligence operations, the process has little to no transparency. Declassifying FISA Court opinions in a form that does not put sources and methods at risk will give the American people insight into what government officials believe the law allows them to do.”