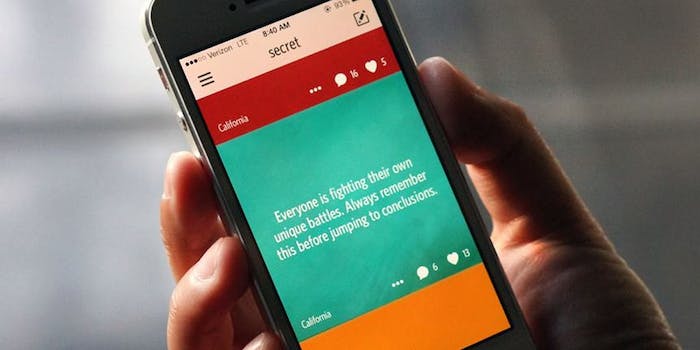 Move over Whisper, it's Secret.

Remember when people on YouTube started covering Rufus Wainwright’s “Hallelujah,” which was a cover of Jeff Buckley’s cover of “Hallelujah,” which in turn was a cover of Leonard Cohen’s original song? That brand of recycling also seems to be popular in the tech world, as indicated by the release of Secret, a new app that appears to be another version of Whisper, which in turn is basically an app version of PostSecret.

What is Secret, you ask? It’s a messaging app that allows users to anonymously share secrets with members of their social circles (in this respect, it differs from Whisper, which allows you to share your messages with pretty much any old schmo, regardless of whether they’re in your social network. You need to have a minimum of three friends on Secret before you can see any posts). The content is largely text-based, but you can add a photo or color backdrop to your post. 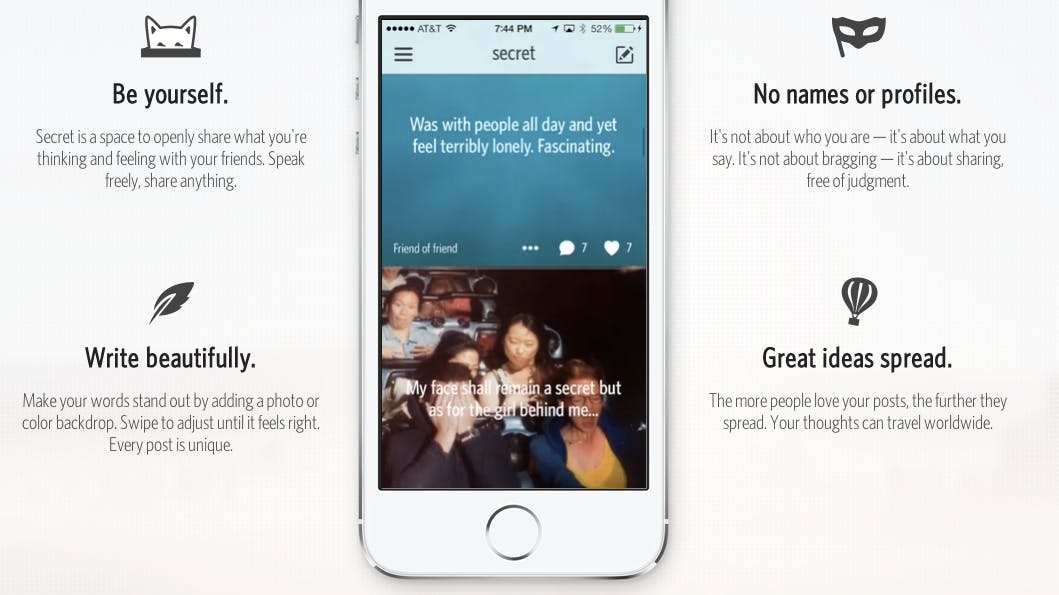 Users are encouraged to “heart,” comment on, and share other people’s secrets, without knowing the identity of the original poster. This veil of anonymity is intended to help create a totally democratic platform, where all of the content is judged solely on its own merits rather than by, say, how many followers the poster has, according to Secret founders David Byttow and Chrys Bader.

“Basically, every secret should stand on the merit of its own idea,” Byttow recently told recode.net. “It would be nice, for once, to have a normalizing platform.”

Whether Secret, Whisper, and other anonymous messaging apps are actually anonymous, however, is up for debate. As a recent Forbes piece notes, Whisper tracks its users so it can monitor trolls and users who violate Whisper’s  guidelines, which means you’re not technically anonymous to the app itself. The privacy page for Secret also notes that the app automatically collects users’ log, location, and device information, which is “solely used by us for debugging and analytical purposes [e.g., to enhance the service].” If you delete your account, the app may also “retain cached or archived copies of information about you” for an unspecified period of time, “as required by law or for legitimate business services.”

Given the enormous popularity of Whisper—as of December 2013, the app reportedly had nearly 3 billion monthly pageviews — it doesn’t seem like most people are losing any sleep over these potential privacy issues. It remains to be seen whether that’ll be the case for Secret, too. The app was just released on the Apple store to U.S. users last Thursday.