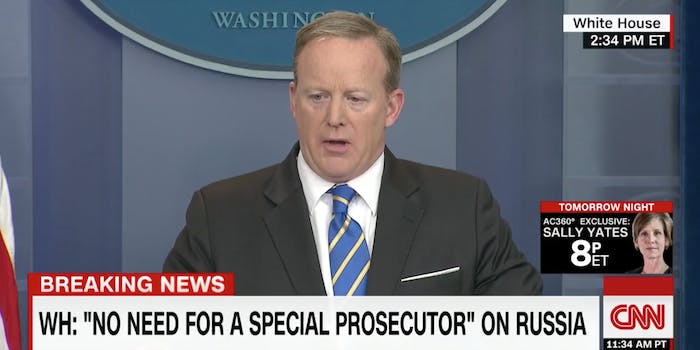 Sean Spicer: ‘No need for a special prosecutor’ in Russia investigation

White House Press Secretary Sean Spicer on Monday brushed off the growing chorus calling for a special prosecutor to take charge of the ongoing investigation into Russia‘s attempts to influence the 2016 presidential election and the Trump campaign’s potential ties to those efforts.

Asked during the White House press briefing whether a special prosecutor was necessary, Spicer said there was “no need” due to multiple investigations in Congress as well as an ongoing “review” by the FBI.

“There’s frankly no need for a special prosecutor. We’ve discussed this before,” Spicer said. “You have two Senate committees that are looking into this. The FBI’s conducting their own review. And I think if you even look at what acting [FBI] Director [Andrew] McCabe said last week, he made it very clear they have they resources they need and the work continues.”

Spicer also claimed that “it’s been made very clear,” according to multiple officials and Democratic leadership in Congress, that there’s “been no collusion” between the Trump team and Russia, and that President Donald Trump is not personally under investigation.

Spicer’s dismissal of a special prosecutor obfuscates the facts. While multiple investigations are ongoing, and McCabe did say the FBI has adequate resources to continue its investigation, the appointment of a special prosecutor is a separate issue. Further, while no one has publicly claimed to have evidence of Trump’s team colluding with Russia, the matter is far from settled.

Democrats and an increasing number of state and federal officials have called for a special prosecutor to conduct an independent investigation into the Trump team and Russia due to Trump’s abrupt firing of FBI Director James Comey on May 9.