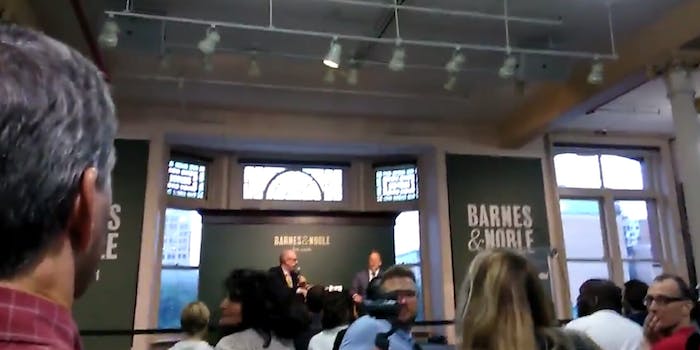 Former White House Press Secretary Sean Spicer was called a “garbage person” by a heckler during a promotional event for his new book in New York on Wednesday night.

Video taken of the outburst shows Spicer, doing a tour for his recently released book The Briefing, about to answer a question before someone shouts at him.

“Hey Sean! You’re a real piece of garbage!” the person shouted from the crowd. “I hope you look around and you see all of these empty seats and you realize in New York City people will not come and pay money to hear you speak. I’ve read the reviews, it’s a garbage book.”

The heckler was then escorted out of the audience, while people shouted back at him.

As he left the event, the heckler continued:

“It’s a garbage book and you’re a garbage person! You lied as press secretary, now you’re lying in your book.”

A source in Brooklyn sent me this video of Sean Spicer getting heckled at a book signing in NYC tonight pic.twitter.com/gDHLL95zui

While Tuesday’s event was interrupted by a heckler, at least he was able to have it. The New York Post reports that a scheduled event in Massachusetts for Saturday was canceled due to the “political climate.”

The heckler called both Spicer and his memoir “garbage,” and apparently some book reviewers agree it’s a fair assessment. The Wall Street Journal called The Briefing “littered with inaccuracies” and the Washington Post said it was “a bumbling effort at gaslighting Americans.”