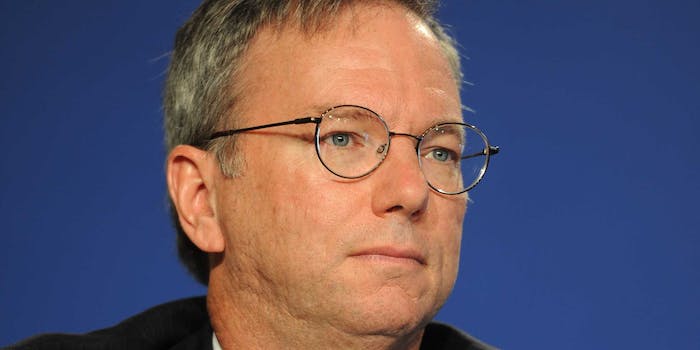 Oh, now he wants to hide something?

With cybercrime and cyberwar becoming a more common fact of life, Google chairman Eric Schmidt believes that the key to cybersecurity is “unbreakable end-to-end encryption” which, he predicts, we will see “within our lifetime.”

Speaking with former U.S. Secretary of State Condoleeze Rice at a recent event at Stanford University, Schmidt asserted that it was technology—not laws—that would save the Internet.

“Everything is going to have to be encrypted all the way,” said Schmidt, according to Stanford’s news website.

Edward Snowden, who leaked a trove of National Security Agency (NSA) documents to journalists last year, has repeatedly argued that encryption is the best way for Internet users to regain their privacy in the face of a global surveillance state.

Schmidt, however, hasn’t exactly been privacy advocate’s best friend through the years. In a 2009 interview with CNBC, the Stanford grad said, “If you have something that you don’t want anyone to know, maybe you shouldn’t be doing it in the first place.”

That bold dismissal of vast privacy concerns—Google, up there with Facebook, knows more about you than you do—triggered a wave of criticism that has yet to yield. Schmidt’s close work with the U.S. government and NSA over the years has done nothing to endear him to privacy advocates either.

However, it’s been cybeattacks on Google by China and the Snowden leaks that have been a major catalyst for the company to promote encryption everywhere.

Strong encryption is widely available but difficult to use. One of the big questions in the cybersecurity world has been how to push average Internet users toward adopting safer encryption. When big corporations like Google and Yahoo offer easy options to encrypt email, security becomes a much more realistic path for most of their over 500 million users.

Still, the question remains: Will we ever seen “unbreakable” encryption?

There is no such thing as 100 percent security when it comes to the Internet and, as skeptical experts have repeatedly pointed out, there is no reason to believe that will change. Schmidt is not a cryptographer and likely does not possess the expertise to create what he’s predicting here.

He is, however, an influential figure in one of the most important technology companies on Earth. If encryption is on his mind in a big way, privacy advocates ought to be glad, even if he seems to be making the goal sound much easier than it really is.