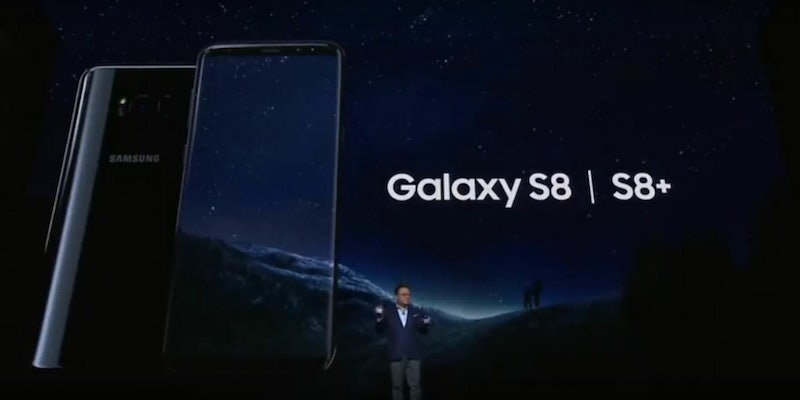 After months of controversy, the tech giant hasn’t skipped a beat.

While the new devices might look similar to their predecessors, several notable changes help them stand out from the wholly lauded S7 and even make them a viable replacement for those impacted by the Note recall.

Here is everything you need to know about the Galaxy S8, including several improvements and a few let downs.

The Galaxy S8 and S8+ continue Samsung’s gently curved and rounded design language, but do away with its now iconic home button and bezels for some added screen—what it calls an “Infinite display.”

With the removal of the multi-function home button, Samsung was forced to push the fingerprint sensor to the back of the device and put its home button underneath the display. The fingerprint reader now sits off-center on one side of the camera. If you’re worried about putting a finger in your rear-facing lens, you can use Iris and face-scanning to unlock your device instead.

Like the S7 and Note 5, the S8 is covered in glass and trimmed in aluminum. The phones are also dust and water resistant to IP68 specifications.

Similar to the LG G6, the Galaxy S8 and S8+ feature an “edge-to-edge” display, which gives the device a gorgeous boundaryless appearance. It also keeps the phone relatively compact while maximizing the size of what is sure to be a stunning screen. The South Korean company opted for a 5.8-inch panel on the Galaxy S8 and an even larger 6.2-inch display on the S8+, both touting a resolution of 2960×1440. Because of this, the S8 has a slightly higher pixel density, but you probably won’t notice.

The S8 and S8+ both have curved screens that roll off the device on each sides like an infinite pool.

The Galaxy S8 cameras are perhaps the biggest disappointment coming out of Samsung’s announcement.

Both phones feature the same 12-megapixel f/1.2 rear camera found on the Galaxy S7. Some software enhancement should help it stand out from what is already a tried-and-true sensor. Samsung says the new devices will include “Multi-frame processing” for reduce noise and increased brightness. Returning are the camera’s optical image stabilization.

The front-facing cameras get a boost to 8 megapixels, just in case there were any imperfections in your face the 5-megapixel of the Galaxy S7 didn’t pick up. 4K video recording also makes a return.

Where the GS8 really has a leg up on competitors (on paper, at least) is its new Qualcomm Snapdragon 835 processor (or Samsung Exynos 8895 depending on your region), which the company was reported to have hoarded from competitors. The 10nm chipset is said to improve CPU performance by 10 percent, and GPU performance by 21 percent over its predecessor.

The Galaxy S8 comes with 4GB of RAM and 64GB of storage, expandable up to a whopping and completely unnecessary (because an SD card this size doesn’t exist) 2TB.

You’ll be happy to know Samsung used an 8-point battery test before installing the new units in the S8.

Whether they are safe or not will be determined with time, but what we do know is that they should provide a full-day charge, without revolutionizing the thing everyone hates the most about smartphones. The S8 and S8+’s 3,000 and 3,500 mAh batteries are also expected on to hold a charge longer.

“Where most batteries hold about 80 percent of their charge after two years, this battery should be capable of 95 percent of its original capacity,” Oh Boo-keun, vice president of Samsung’s mobile R&D team, told CNET.

Samsung decided not to follow the polarizing decision of others (we’re looking at you Apple) to nix the headphone jack. It sits on the bottom of the device. The company’s recent acquisition of Harmon should also do some good for the Galaxy S8’s built-in speakers, but no word on how they perform yet.

The new devices both predictably run on the latest Android Nougat 7.1, but Samsung was unusually quiet on what sort of changes they have made to Google’s OS.

The announcement focused more on making the phone more than just a device, but a gateway to a connected world. To achieve that goal, the Korean company announced an in-house Siri competitor, Bixby. The new digital assistant gets its own launch button on the left side of the Galaxy S8. Unlike Siri and Google’s Assistant, Bixby was created to make the phone easier to use. Samsung says it will add its voice assistant to many other smart devices, including TVs, refrigerators, and even air conditioners.

Samsung also added a new feature called “Samsung Connect,” which shows you all IoT devices you are connected to and allows you to monitor them remotely. And Samsung Pass lets you log into banking and other sites using biometrics.