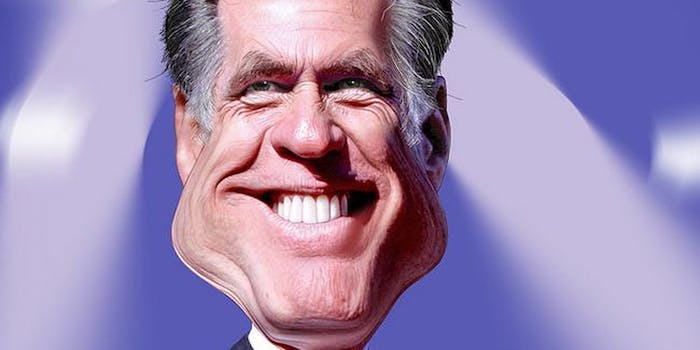 Is the Romney campaign pilfering traffic through URL typos?

Be careful with your typos. Enter the wrong URL, and you might just find yourself at the official Romney campaign site.

Mitt Romney’s official campaign site is getting some unexpected traffic thanks to a URL typo of a popular online e-cards site.

By accidentally typing in Someecards.co into your brower, you are redirected to Romney’s official About page and not Someecards.com, the e-card site famous for its topical cards and acerbic humor.

The identity of the person who owns Someecards.co is being protected using Domains By Proxy, a GoDaddy affiliate that helps keeps domain information private.

With the election less than 60 days away, is this Romney’s way of juicing his traffic? Or could this just another funny prank? In February, Romney  was the topic of a popular Pinterest parody account that was quickly taken down by his campaign. But with President Barack Obama currently dominating Romney in the world of social media and Internet engagement, perhaps the Romney campaign feels capitalizing on people’s typos is the way to the Internet’s heart.

Since 1991 the .co domain has been exclusive to Columbia, which delegated its control to the University of the Andes. In August 2003 the Colombian government assumed control of the domain administration and in July 2010 opened up the domain to the rest of the world. Since then, there have been more than 1 million .co domains sold through sites like GoDaddy. Many big brands, like Coca-Cola, have bought up the rights to their .co domain to protect their trademark and prevent confusion.

The Someecards.co domain is currently up for auction starting at $280. The auction ends on Dec. 4.

Because Someecards.co is a redirect, accurate traffic data was not readily available.