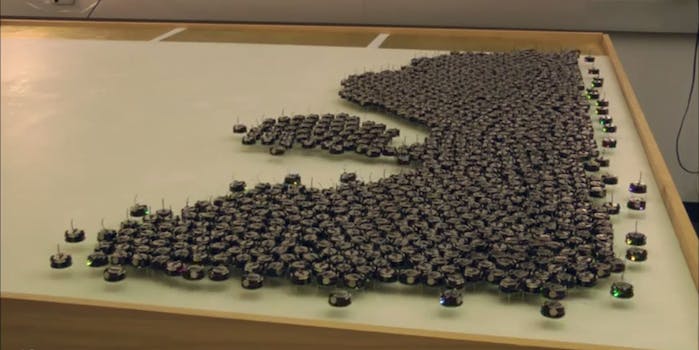 Harvard researchers create robots that can assemble themselves

This is the beginning of the end.

It was just a matter of time: Robots have finally banded together. Fortunately, they aren’t rising up against humankind—yet. Rather, they are arranging themselves into pre-selected patterns.

The “Kilobot” is a very small robot measuring only a few inches in diameter. Researchers at Harvard University mass-produced 1,024 of the Kilobots and put together a YouTube video showcasing their nearly flawless assembling capabilities.

The reason for such design and execution is for the researchers to study the collective behaviors of everything from fish to cells.

While the shape of a wrench or the letter “K” may not be too threatening at the moment, let’s hope that the Harvard scientists will pull the plug once they enter the lab and see that their new technological breakthrough has arranged itself into, oh I don’t know, a flamethrower.