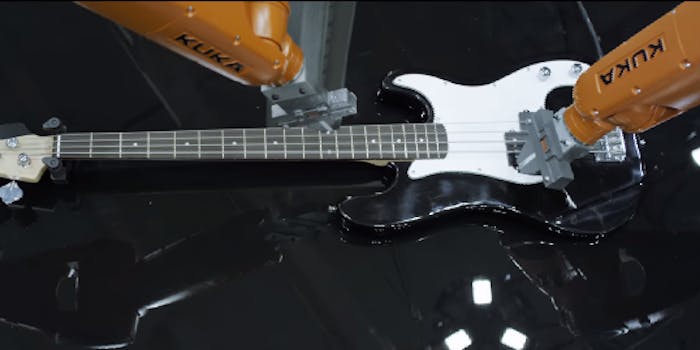 Watch robots rock out, then turn against their programmer in ‘Automatica’ video

Technology is getting better all the time.

Anyone who’s excited by the idea of robots becoming more and more seamlessly integrated into everyday life will probably love this, although anyone who fears that same future likely won’t be so keen. But then again, who doesn’t love a sick, slick music video?

That’s exactly how to describe what New Zealand musician Nigel Stanford released this week, rolling out his new album Automatica with an imagined collaboration between humankind and a team of crane-armed, musically inclined robots.

The video is titled “Automatica 4k—Robots vs. Music,” and it’s clear how it got that name. Standing in the middle of a warehouse, flanked by the robots, Stanford watches his automatons hammer out a tune on bass, piano, drums, and even a turntable. Ultimately, the video turns chaotic toward the end, as Stanford takes over on guitar while the machines take a decidedly more aggressive attitude toward their instruments.

As cool as the produced, polished video is, it might not be quite as interesting as the one showing Stanford programming and tinkering with the arms, getting them ready to play the bass. The behind-the-scenes footage shows a more raw, basic sound, unaided by visual or audio production effects. It is, in a far simpler and less dynamic way, every bit as fascinating and enjoyable as the finished product.

Both videos give a sense of just how impressively the actual robot arms, manufactured by KUKA Robotics, can produce their own music. Stanford reportedly spent about a month working on programming the robots in his garage, and although it expresses his fascination with robots and futurism, as TechCrunch notes, he also admitted to another quite sympathetic motivation.

“I also just thought it would be cool to see a robot explode a piano,” Stanford said. And really, who can blame him?