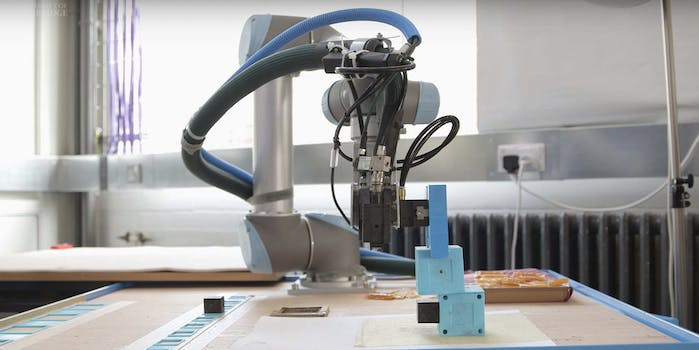 Robot evolution is a thing, and that’s definitely not scary at all

Robots are building better versions of themselves. Cool. Great.

It turns out that robots are just as capable of natural selection as living, breathing organisms.

European researchers led by scientists at the University of Cambridge created a “mother” robot capable of building and testing “child” robots. The “fittest” robot in a group had its traits applied to another batch of children, and each time this happened, the robots improved.

Like a technological version of natural selection—the evolutionary process that determines the best genes to pass to ensure survival and reproduction—the robots passed on their best traits with each successive generation. The results were significant: the “fittest” robots in the final group were twice as fast as the “fittest” robots in the first group.

The only thing the researchers did was tell the mother robot to start making her children. After that, the robots took over.

The mother robot, a one-armed machine with a gripper, manipulator, and glue supplier, created square robots with servo motors that allowed them to move around. Mama robot then judged how fast they moved and applied the traits of the fastest robot to the next generation.

This research in a field known as evolutionary robotics explores how autonomous machines can replicate themselves without any help from humans.

As the University of Cambridge researchers noted, this work has so far mostly been tested through computer simulations that don’t necessarily produce the best children.

While using a computer simulation to study artificial evolution generates thousands, or even millions, of possibilities in a short amount of time, the researchers found that having the robot generate its own possibilities, without any computer simulation, resulted in more successful children. The disadvantage is that it takes time: each child took the robot about 10 minutes to design, build and test.

The one-armed mother robot’s children did nothing but roll around and get faster as their algorithms improved, but the experiment did prove that robots can learn and adapt in an environment without human control.

We likely won’t see this technology outside of labs anytime soon, but it does represent an important step in the process of making robots a little more lifelike.