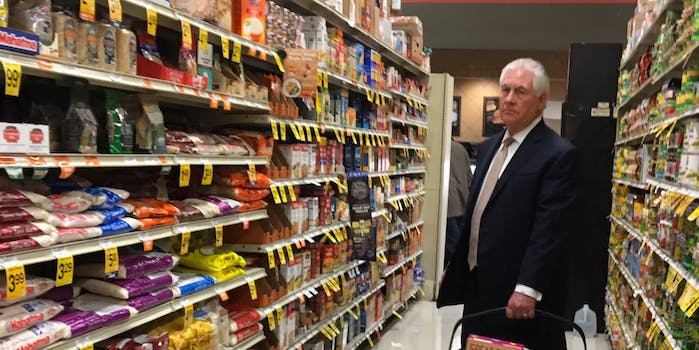 How much cereal can you buy for $240 million?

President-elect Donald Trump‘s nominee for secretary of state, Rex Tillerson, was spotted on Tuesday shopping for groceries at a Washington, D.C., Safeway. Of course, he had a security guard along with him, according to Sanho Tree, a fellow at the Institute for Policy Studies.

Yup. That's Rex Tillerson in my local Safeway shopping like a plebeian. His security guy is about 20 paces behind him. pic.twitter.com/9ptVGo8dBE

As the Washingtonian reports, this particular Safeway, located in Washington’s Dupont Circle neighborhood, is known as “Soviet Safeway” due to its poor selection and “slow checkout lines.”

Tillerson, the former CEO of ExxonMobil, has made more than $240 million over the last decade, according to CNN. This week, Tillerson reportedly cut ties with his more than 2 million shares of Exxon Mobil stock, worth an estimated $180 million. The company will instead pay Tillerson the cash value of the stock over the next 10 years as part of a retirement package.