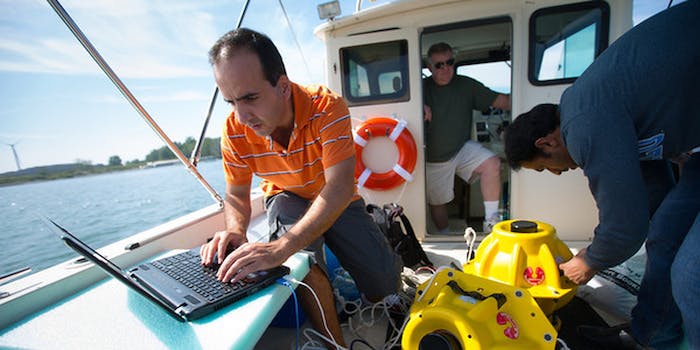 These researchers are taking the Internet underwater

Underwater wireless networks exist, but they can't talk to each other. This project could change that.

Researchers from the University of Buffalo, N.Y., tested an underwater wireless network in Lake Erie. The network would be useful in predicting tsunamis, according to the BBC. (Sorry, no fishy emails… yet.)

The underwater network uses sound waves, as opposed to regular Wii-Fi’s radio waves. The team is hoping to create a standard that underwater wireless networks, which have existed before, can use to connect to each other and share data more quickly. For instance, the BBC reports that the U.S. National Oceanic and Atmospheric Administration’s tsunami data currently can’t be shared with the U.S. Navy’s underwater network. Connecting the two would be supremely useful.

The hope is that this technology would become available easily to anyone with a smartphone or computer and help provide better warnings about disasters and save lives.

At Lake Erie, the researchers, led by Tommaso Melodia, submerged two 40 lb. sensors and transmitted messages to them via a laptop on the surface. The researchers will present their findings at an underwater networking conference in Taiwan next month.