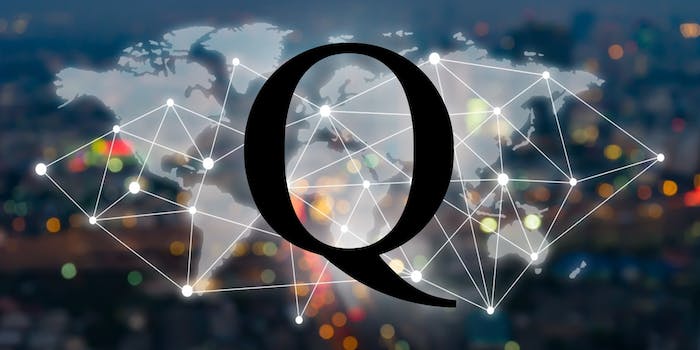 Metadata in pictures shared by 'Q' reveals they may be linked to Asia and the U.S. West Coast

The individual(s) responsible for making message board posts under the pseudonym “Q,” who helped spark the QAnon conspiracy theory, may live on the West Coast of the U.S. and have a history of traveling in Asia.

A new report published by Bellingcat on Monday alongside The Q Origins Project analyzed metadata in photos posted by Q on the far-right message board 8kun and its predecessor 8chan between October 2017 and December 2020.

Q, according to the conspiracy theory, is a high-level intelligence figure who posted to far-right message boards in order to reveal then-President Donald Trump’s secret battle against an international cabal of child-eating pedophiles.

Despite dozens of failed predictions from Q, who went silent last December after Trump lost the 2020 election, the movement has grown exponentially since first emerging in 2017.

After analyzing metadata found in images from 27 separate posts, also known as “Q drops,” the investigators linked the user behind the account to two specific time zones.

“We infer from the metadata that the images are screenshots taken in two time zones: UTC+8 and the Pacific time zone,” the report reads. “UTC+8 is a time zone including the Philippines, China, Mongolia, Taiwan, Malaysia, Brunei, and parts of Indonesia, Russia and Australia. Pacific time includes the West coasts of Canada and the USA, Nevada, part of Idaho, and part of the northwest coast of Mexico.”

Based on the findings, the report goes on to state that if accurate, the images “could suggest that Q is a single individual who lives in the Pacific time zone but has traveled extensively in Asia.”

Specifically, someone with access to the Q account, based on pictures posted from Asia, appeared to stop in numerous prominent locations including “Hong Kong, Chongqing, Shanghai, and Bangkok.”

The report concludes by stressing that the evidence presented “is not by itself sufficient to identify any particular individual as Q or an associate of Q.”

But the findings for many appeared to point to Ron Watkins, the former administrator of 8chan and 8kun, who has lived in Japan. Ron’s father, Jim Watkins, who owns the message board, has also lived in the Philippines. The Philippines lie in the UTC+8 time zone used by Q, with Japan just outside it.

Ron Watkins has long faced accusations of posting as Q but has become an even greater focus for many after his appearance in an HBO documentary, Q: Into the Storm, in which he appeared to inadvertently admit to being much more aware of Q’s action than before.

Bellingcat notes that it was unable to reach Ron but managed to get a response from Jim, who “cast doubt on the methodology of the research and its usefulness.”

The Q Origins Project also stated on Twitter that their findings were not meant to provide a definitive answer on the identity of Q but instead provide researchers with useful information in the search.

“Because UTC+8 includes the Philippines, some of you may be tempted to see this as proof of Jim Watkins’ involvement, at least at some points in the QAnon story,” they wrote. “It’s absolutely not proof. If it WERE proof, I’d promote it in those terms. But it’s not, so here we are.”

In comments to the Daily Dot, The Q Origins Project stated that “it seems clear that someone from the West Coast (or Nevada) is involved with generating Q’s content.”

“It may well be that Q is just a single person on the West Coast who travels,” they added.

Still, others thought the evidence was clearly indicative of the Watkins’ involvement, most notably Fredrick Brennan, who formerly worked with the two.

Either way, the Bellingcat report will undoubtedly spur further investigation into who helped launch and sustain one of the most prominent conspiracy theories in modern-American history.

Correction: The article initially mislabelled what time zone Japan is in. It is in UTC+9.