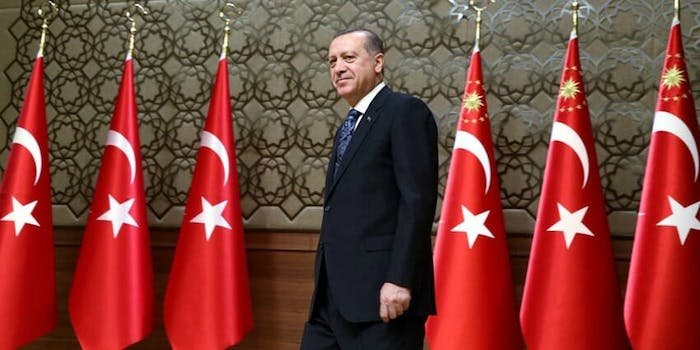 Erdoğan even tied up the country's emergency line.

On the anniversary of last year’s coup attempt in Turkey, domestic phone calls on Sunday were interrupted by a prerecorded message from President Recep Tayyip Erdoğan.

With subtitles in English, here's that remarkable Erdoğan message that people in Turkey hear whenever they make a phone call (MT @nazliavs) pic.twitter.com/J6oJXEBz1x

The 15-second message, which played on all phone calls for 30 minutes beginning at midnight, said: “As your President, I congratulate your July 15 Democracy and National Unity Day, wish for God’ mercy on our martyrs, and health and wellbeing of our veterans.”

Some took it lightly.

Others were more heated.

I just tried to call my aunt and instead I heard Tayyip Erdoğan talking about his coup. That is very, very abnormal.

Turkey is in trouble.

Initially thought to be a service by Turkcell —a wireless provider with ties to the government— it was later revealed to include all calls from all providers, even to the country’s emergency phone number, 112.

A few users reported that they didn’t hear the message at all, while some said they received it for much longer.

Made a phone call at 00.21 to a friend, all I got was #Erdogan's voice talking abt the #July15. Incredible! #Turkey

At 12:30am local time, the chair of Turkey’s Internet and Telecommunications Authority confirmed to local media that the government had coordinated the delivery of Erdoğan’s message through all operators as a “surprise” to all subscribers.

The commemoration ceremonies for the coup attempt also involved all 85,000 mosques in the country reciting Sela prayers —which was used to mobilize civilians against the army during the night of the coup attempt—and Erdoğan’s widely broadcast speech at the parliament where he promised to restore the death penalty for the putchists before a cheering audience.

His critics, however, are not celebrating. The opposition party CHP’s leader Kemal Kılıçdaroğlu penned an opinion piece for the Guardian in which he wrote Erdoğan exploited Turkey’s crisis to turn the country into “a near-dictatorial regime.” After hearing Erdoğan’s voice on his phone, MPs from Kılıçdaroğlu’s party were steaming on Twitter:

English translation: “Enough is enough… He even crops up on the phone… What the hell is this after all that insult… It is like a nightmare…”

English translation: “Making me listen to Erdoğan’s voice, without my consent, violates the freedom of communication. GSM companies have committed a crime.”

Still, some kept the spirits high.

English translation: “I called a friend of mine but then there was this someone! Oh my God! I hung up on him.”