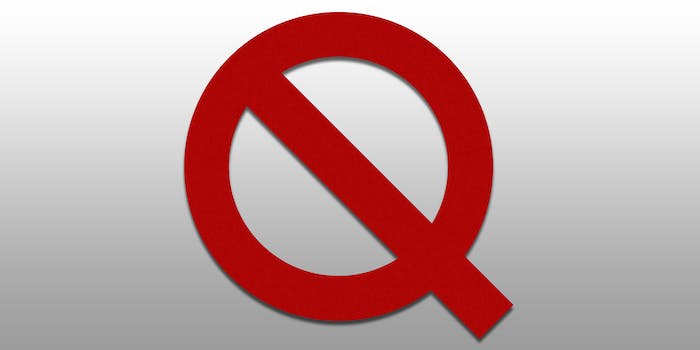 It's trying to trick you into doubting everything you knew about the movement.

“Thought-terminating cliché” was a phrase coined in psychiatrist Robert Jay Lifton’s seminal work on mind control, Thought Reform and the Psychology of Totalism. Described by Lifton as “the start and finish of any ideological analysis,” the thought-terminating cliché is just that—a short phrase designed to stop those who hear it from further exploration. Such cliches can be as simple as “it is what it is,” or “that’s just your opinion”—phrases that end a conversation in a way so as to remove the possibility of rebuttal.

In the QAnon world, thought-terminating cliches are the currency that Q and the movement’s biggest promoters use to stop followers from delving into the contradictions and failed predictions inherent to the movement. Anons are told to “trust the plan” and “nothing can stop what’s coming,” despite there being no evidence there’s a plan or anything coming. They’re told “where we go one we go all” to foster community while simultaneously ignoring that many individual Q believers have committed horrible crimes or grifted off the movement. Now, Q promoters are falling back on another thought-terminating cliché as the Q movement transitions from waiting for “The Storm” to waiting for former President Donald Trump to be restored to power: “There is no QAnon.”

This is not to say that Q believers are claiming the Q movement itself doesn’t exist. But what they have very quickly agreed on is that the term “QAnon” was made up by the media as an easy way to smear those who think that Q is an actual military intelligence insider. They still believe the mythology of Q, that “The Storm” is coming, and that the deep state’s treachery and evil will soon be exposed. But they no longer identify as being part of something called “QAnon.” They claim that it was never real at all.

In September 2020, with bad press and social media bans piling up, a Q drop commanded believers to “Deploy camouflage. Drop all references re: ‘Q’ ‘Qanon’ etc. to avoid ban/termination _censorship install.” A month later, Q responded to a Newsmax reporter’s tweet that “the media calls #Q a cult group that believes in Satanic Sex rings, vampires and inter dimensional beings. I searched #QAnons posts and found Zero mention of any of those things. ZERO.  The media lies to hurt” with this thought-terminating cliché that has now changed the trajectory of the movement for good:

Media labeling as ‘Qanon’ is a method [deliberate] to combine [attach] ‘Q’ to comments _theories _suggestions _statements [and ACTIONS] made by 2.

Q was claiming the “QAnon” movement that had gotten so much media attention was a construct, created by that same media in order to make Q believers look crazy or violent. Q, of course, was real. And the anons who decode Q’s drops were real. But there wasn’t anything called “QAnon” to belong to. Therefore, anyone who used that term was part of that media machine, coordinating endless attacks on Q believers and pushing the deep state’s agenda of hate and division, the very thing Q fought so hard against. Also, it made Q believers harder to single out and ban, much like the movement’s embrace of “save the children” rhetoric had during the summer of 2020.

Embracing “there is no QAnon” suddenly became a way for Q acolytes to distance themselves from what they think is the media version of their movement, while still believing in the movement itself. Camouflage, as Q said.

The concept that “QAnon” wasn’t a real thing had already been floating around 8chan/8kun. But Q took it from a few obscure posts to unquestioned orthodoxy with that drop, immediately and totally souring Q believers on its use. The phrase “there is no QAnon” showed up in dozens of posts on 8kun, and in thousands of tweets posted in the days after the Q drop. Ever since then, any mention of QAnon on social media, either by a prominent figure or in reference to a news story is greeted with a chorus of identical replies that “there is no QAnon,” as if the term itself was conjured up by the New York Times. And major Q promoters have also abandoned the term. Q guru InTheMatrixxx constantly refers to it as an “MSM strawman.”

As a Q believer recently wrote on Q message board greatawakening.win, “When I hear or read someone using the term “QAnon”, I am dealing with someone who only knows the MSM version of the story, and hasn’t done any investigation or research on their own.”

This is revisionist gaslighting. The term “QAnon” has been part of the movement since shortly after the first Q drop, and Q had used it or referred to it countless times in previous drops. An August 2018 drop asked “Did you notice the FOX NEWS coverage of ‘Qanon’ last night?” while a drop from February 2019 claimed “What does FEAR look like? 30m use ‘Qanon’ across ‘censored’ platforms? Incorrect, much more.”

And Q constantly told people to search for that term in order to see evidence of the media’s increasing “obsession” with taking down a movement it simultaneously claimed was both dangerous and a kooky conspiracy theory. But at no point did Q ever claim that the term has been made up by the media. Up until the moment Q claimed that QAnon didn’t exist and was invalid, QAnon existed and was valid to Q.

Likewise, Q believers themselves used the term constantly, all over their social media and merchandising. There are hundreds of thousands of references to QAnon on the chan boards and on Twitter as well until most major Q accounts were banned. No major Q promoter ever claimed the term was fraudulent until the Q poster said so. Even InTheMatrixxx, who now calls the term an MSM strawman, routinely used #QAnon in Twitter threads decoding Q drops and spreading conspiracy theories.

Before they were pulled down, you could go to sites like qanon.pub, qanon.news, and qanon.app to get the latest drops and decodings. The most popular book in the history of the movement is called QAnon: An Introduction to the Great Awakening. Even now, with the term seemingly forbidden, at least two Q Telegram channels, QAnonOfficial and QAnonMemes, use it and have nearly 100,000 subscribers each.

While it’s easy to assume that the total and complete memory hole treatment for the term “QAnon” is just another example of cultists doing what cultists do, it’s likely that there’s more going on here. In fact, it might actually be a smart branding move for the future of the Q movement. “QAnon” itself has become toxic, shorthand for violent lunatics who think Oprah eats babies and President Joe Biden is a clone who illegally took over the White House. That process started long before the Jan. 6 Capitol insurrection, but became even more urgent afterwards. Whatever movement Q believers thought they were part of, it was going to have to change with Biden taking office and Trump defeated.

It’s not clear if the Q poster anticipated Trump’s loss and the need for their movement to evolve, or if the banning of QAnon promoters was making it harder to keep money flowing in and believers happy. Q hasn’t made a drop since early December, which calls into question whether “there is Q” anymore. But whatever the intention, QAnon as we’ve come to know it can’t be that anymore without Trump in office, because it’s a prophetic movement built around Trump crushing his enemies. Anything that comes afterward will need to be different and will need different branding and iconography. The mythology of QAnon might be toxic, but it’s also become obsolete.

Identifying as part of “QAnon” has become a good way to get banned on social media and shunned by loved ones, but Q believers continue to be enmeshed with the mythology they’ve created, and they aren’t willing to leave it behind. They’re only trying to leave behind what they used to call it.