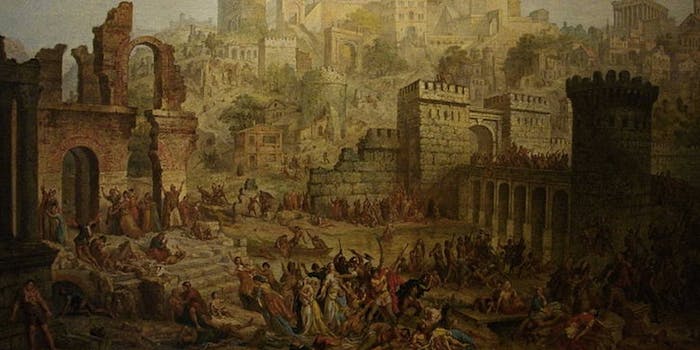 Straight trolling from the master.

At the annual National Prayer Breakfast on Thursday, President Obama did something truly unforgivable: He demonstrated a basic knowledge of world history.

Condemning the recent extremism of groups like the Islamic State, he drew connections to past campaigns of violence carried out in the name of Christianity, including the Crusades, the Inquisition, and slavery. Like today’s jihadists, he said, the proponents of these movements were “twisting and distorting” the tenets of their religion to rationalize barbaric acts.

Obama himself surely knew better than anyone that he was igniting an online firestorm with these comments—he did mention hate groups with Twitter accounts and how bigotry can fester in cyberspace, after all—and sure enough, conservatives were more than willing to prove for the umpteenth time that they lack any sense of semantic nuance.

Consider this: we are ruled by a leader who watches our enemies burn a comrade alive and he lectures Christian leaders about the Crusades!!!

@JeffreyGoldberg The view that the Crusades are morally equivalent to ISIS is not widely accepted among Christians. For good reason.

Let's pretend Obama's comparison of Radical Islam and the Crusades was valid.
The difference is Christians stopped crusading"

The Crusaders recaptured Jerusalem from Muslim conquest–so Muslims are responsible both for ISIS & the Crusades! http://t.co/gICDly222k

So according to Obama, the Islamic State isn't Islamic, but the Crusades and Inquisition were about killing in the name of Christ. #help

Only Obama can turn Muslims murdering other Muslims into a referendum on Christian guilt.

The Catholic League’s Bill Donohue wants an apology, of course:

Christians had nothing to do with a man being burned alive in a cage we saw on Wednesday that we saw took place last month. Nothing to do it! Yet he named them, invoked the name of Christ—our savior!—three times and talked about Christians but couldn’t call radical Islam for what it was, couldn’t name the person behind the match.

Over at the National Review, Jonah Goldberg also invoked the revisionist canard that the Crusades were defensive wars and then went on to excuse the atrocities of the Inquisition:

As for the Inquisition, it needs to be clarified that there was no single “Inquisition,” but many. And most were not particularly nefarious. For centuries, whenever the Catholic Church launched an inquiry or investigation, it mounted an “inquisition,” which means pretty much the same thing. … I cannot defend everything done under the various Inquisitions—especially in Spain—because some of it was indefensible. But there’s a very important point to make here that transcends the scoring of easy, albeit deserved, points against Obama’s approach to Islamic extremism (which he will not call Islamic): Christianity, even in its most terrible days, even under the most corrupt popes, even during the most unjustifiable wars, was indisputably a force for the improvement of man.

Former governor of Virginia Jim Gilmore spared no hyperbole in his attack:

The president’s comments this morning at the prayer breakfast are the most offensive I’ve ever heard a president make in my lifetime. He has offended every believing Christian in the United States. This goes further to the point that Mr. Obama does not believe in America or the values we all share.

Charles Krauthammer just wants to put the past behind us, man:

I was stunned that the president could say something so—at once—both banal and offensive. Here we are not two days of way from an act of sort of shocking barbarism: the burning alive of a prisoner of war. And Obama’s message is that we should remember the Crusades and the Inquisition. …. Everyone knows that. What’s important is what’s happening now.

At MSNBC, Joe Scarborough—who found the speech “baffling”—pleaded for Obama to dumb down his ideas:

It’s unbelievable. The stupid, left-wing moral equivalency. Sometimes you can just say, ‘Hey, you know what? There are some really, really bad Muslim extremists.

Bishop E.W. Jackson advised the president to close his mouth rather than Guantánamo Bay:

This man is a nihilist and an narcissist and an extremist … Lincoln would say, following Obama’s argument, ‘Don’t get on your high horse. this is not an existential threat.’ Lincoln might say, ‘Why in the world would I send hundreds of thousands of men to their death to end slavery?’ What Obama is saying and doing is the lowest of the low.

Could all these offended Christians be piling on in order to distract from an exceptionally strong January jobs report? Because I’m pretty sure Jesus was in favor of a war on poverty.