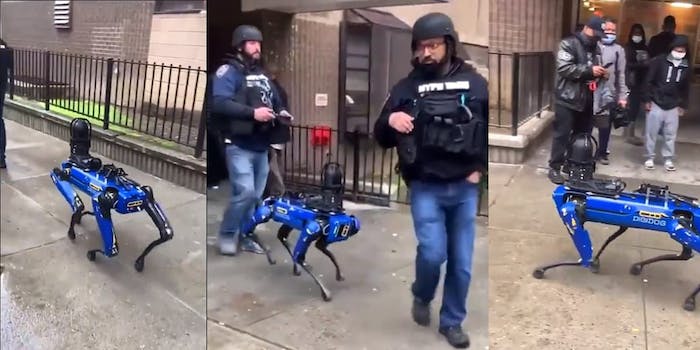 NYPD gets rid of police robot dog after public pressure

'I am glad the robot dog has been put down.'

The New York Police Department (NYPD) has announced that it plans to return its police robot dog after receiving significant pushback.

In a statement on Wednesday, John Miller, the NYPD’s deputy commissioner for intelligence and counterterrorism, revealed that the department would be canceling its $94,000 contract with robotic design company Boston Dynamics.

Known officially as “Spot” but referred to as “Digidog” by police, the robot stirred controversy in February after footage of it being deployed in the Bronx went viral.

In a tweet at the time, Rep. Alexandria Ocasio-Cortez (D-N.Y.) condemned the department’s acquisition and accused police of deploying “robotic surveillance ground drones.”

“Shout out to everyone who fought against community advocates who demanded these resources go to investments like school counseling instead,” she tweeted. “Now robotic surveillance ground drones are being deployed for testing on low-income communities of color with under-resourced schools.”

In remarks to the New York Daily News, Miller disputed the claim from Ocasio-Cortez that the robot was being used for surveillance.

“It was never a piece of ‘surveillance equipment.’ Some people who had an agenda tried to make it out to be for spying. Really?” Miller told the New York Daily News. “It was loud when it walked, had a camera for a head, flashing lights and a speaker a police officer could use to communicate if needed. It wasn’t exactly going to be shadowing anyone down the street or hiding in a doorway on surveillance.”

Miller instead claims that the department was testing to see whether the robot could be used to survey scenes at armed standoffs, hostage situations, and chemical or radiological events.

“Those comments were very misinformed, but did damage to public trust,” Miller added. “This is a piece of equipment we won’t have when it could make police officers or victims safer.”

But the pushback from the public and lawmakers wasn’t the only issue. Comptroller Scott Stringer, a Democrat from the Upper East Side, also claimed last week that the NYPD never informed the city about its purchase.

The removal of the robot dog also comes after City Councilman Ben Kallos filed a subpoena to learn just how much the NYPD had spent on Digidog.

“Our city needs more community policing, officers connecting to residents, not scary military-style gadgets that scare folks,” Kallos said. “We did the work to find out how much was spent on this and we put pressure on the city to adjust priorities. I am glad the robot dog has been put down and we can use the money that would have gone to buying more of these to invest in communities and building better relationships with residents.”

The planned return of the robot was also praised by Bill Neidhardt, a spokesman for Mayor de Blasio.