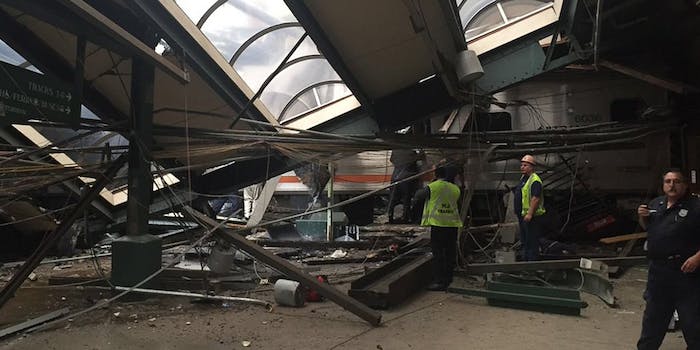 There is one confirmed casualty, and reports of over 100 injured.

A NJ Transit train has crashed into a station in Hoboken, NJ, and there are reports that as many as 100 people have been injured. One person has been confirmed dead.

One of my best friends was on the #Hoboken #NJtransit train that crashed this morning. She commutes on it daily pic.twitter.com/8mdBSk3CkL

Scariest quote on Hoboken: "The train never stopped. The terminal was basically the brakes for the train." https://t.co/PJ4zsVF4bl

While it’s unclear what caused the crash, witnesses say that the train felt like it was going too fast. “It simply did not stop,” WFAN anchor John Minko told local radio station 1010 WINS. “It went right through the barriers and into the reception area.”

The station has been evacuated due to considerable structural damage. Witness Alyson Hudson told the New York Daily News, “You could see the whole ceiling, it looks like it took the whole support beams down, the ceiling was coming down around it.”

Hoboken is about seven miles outside of New York City, and a major transit hub. Sources tell NBC that the crash was an accident, not an intentional act.

Update 1:04pm CT Sept. 29: The number of fatalities has been revised as per a press conference. Originally, it was believed that three people were dead following the crash. New Jersey Gov. Chris Christie has confirmed that one person was killed and 108 were injured.