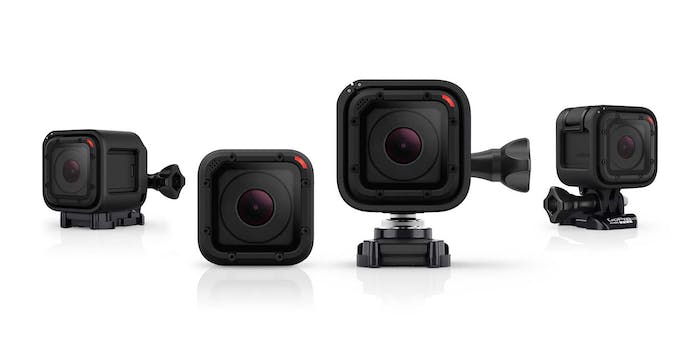 Don't put it in your drink.

The maker of the world’s favorite go-anywhere camera has a brand new device for you to mount on everything that moves. GoPro‘s new HERO4 Session is smaller, lighter, and looks to be a solid solution for anyone in the rugged camera market.

The HERO4 Session improves upon some areas in which the old GoPro cameras came up short. GoPro has cut down the size of the device by 50 percent and the weight by 40 percent. The company has also added waterproofing, a welcome addition that does away with the need for additional housing to protect to device and fitting feature for a camera shaped like an ice cube.

The interface on the HERO4 Session has been simplified to a single button: tap to start recording, tap again to stop. A long press begins a time lapse photo capture. Users will also be able to go hands-off with controls by pairing the camera with the GoPro Smart Remote or smartphone app.

The camera itself is capable of capturing 1080p video at 60 frames per second (fps), 720p at 100 fps, and 1440p at 30 fps. It can also take 8 megapixel pictures in single shot, burst shot, and time-lapse modes. Built into its tiny frame is a dual-microphone system and Wi-Fi and bluetooth connectivity.

GoPro has also equipped the HERO4 Session with features found in its popular HERO4 model, including recording modes like the wide-angle SuperView, the high quality capture capabilities of Protune, and Auto Low Light mode for recording better footage in less-than-ideal lighting situations.

The HERO4 Session hits store shelves on July 12, priced at $399.99. There has been no word on if GoPro will adjust the prices of its existing models with the new entry into the lineup.