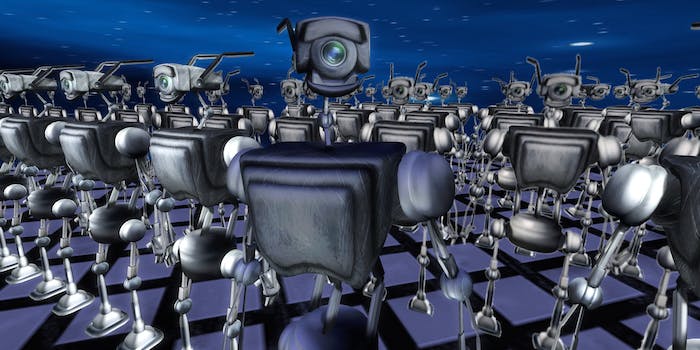 Google’s Nest is preparing for the robot apocalypse

Here's definitive proof Nest is just a bunch of nerds.

Nest, the smart home gadget group Google scooped up early last year for $3.2 billion, is at the forefront of the Internet of Things movement, and that makes the company a perfect candidate to accidentally develop a conscious, self-aware AI that will enslave mankind for all eternity.

Think that sounds a bit far fetched? Nest—or at least one employee at Nest—doesn’t, and they’ve hidden a nod to classic sci-fi literature within the guts of company’s own website to ensure humans remain in charge.

Before we dive into Nest’s hilarious little Easter Egg, you need to know what “robots.txt” is: Every Web page has the potential to be cataloged and crawled by search engines and archival sites, so long as it’s accessible via normal Web browsing. Administrators can tweak how much of a sitemap these web crawling bots actually see by adding a document called “robots.txt.”

Within a site’s robot.txt document, pieces of the site that bots cannot catalog are labeled “disallow.” It’s a simple system that is usually used to keep pages with no search or archival value from popping up on search results, and the vast majority of users never even realize it’s there.

Whoever composed the robots.txt document for Nest was counting on someone eventually seeing it, and they included a hilariously geeky inside joke that only other true nerds would grasp. I happen to be just that kind of person, and when I stumbled upon Nest’s official robots.txt list I had a good laugh. Here’s what it looks like:

There’s all the usual bits here, including instructions for Web bots to ignore parts of the site that are constantly changing or are otherwise bad candidates to show up on a Web search, but there’s also a trio of commands that aren’t associated with the site whatsoever:

If you’re a fan of classic science fiction, you don’t need me to explain these to you, but if you haven’t gotten around to reading the works of acclaimed sci-fi author Isaac Asimov, I’ll fill you in.

These are abbreviated versions of what are known as the Three Laws of Robotics, or sometimes simply the Three Laws. In order to lay the groundwork for a fictional future in which sentient robots were both friend and foe, Asimov drafted this simple set of rules. The actual laws read as follows:

If you’ve read Asimov’s I, Robot—or seen the Will Smith flick of the same name—you know how easily these laws can be, well, misinterpreted, but including them in the robots.txt list is a stroke of genius, and a fantastic nod to the past even as Nest and Google push us further and further into the future.

Photo via isfullofcrap/Flickr (CC BY SA 2.0)