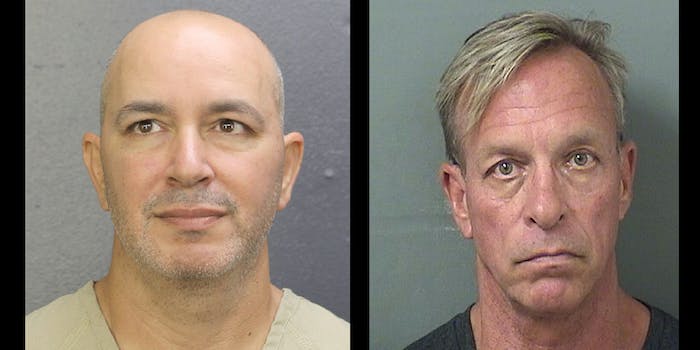 Check out their own mugshots.

Two alleged owners of Mugshots.com, Sahar Sarid and Thomas Keesee, were arrested in south Florida for charges of extortion, money laundering, and identity theft, according to a local NBC affiliate.

The two owners have made a fortune off publishing mugshots and then demanding payment for their removal. The owners sift through data from law enforcement websites to publish people’s names, booking photos and charges. The site then reroutes to a secondary website called Unpublisharrest.com to charge people a “de-publishing” fee if they wish to have their photo taken down.

“This pay-for-removal scheme attempts to profit off of someone else’s humiliation,” Attorney General Becerra said. “Those who can’t afford to pay into this scheme to have their information removed pay the price when they look for a job, housing, or try to build relationships with others. This is exploitation, plain and simple.”

California outlawed charging people money to remove their mugshot from the internet in 2014, according to the Sacramento Bee, and last year, Florida passed legislation prohibiting the same thing. Florida’s law goes into effect July 1.

The two other owners of the website, Kishore Vidya Bhavnanie and David Usdan, have also been arrested. Bhavnanie was arraigned by a Pennsylvania state judge also on Wednesday, with his bail reportedly set at $1.86 million.

https://t.co/Thdh077SaD puts people's mugshots online, and then demands payment to take them down. The site's founders were just arrested for extortion. Here are their mugshots. pic.twitter.com/gIKwCKHrxU

Its about time. https://t.co/oO5wjbeafD is built on a fraudulent and abusive business model. It’s pay-for-removal scheme subjects thousands of people to their predatory tactics. And an arrest means nothing in this era of racial profiling and discriminatory policing practices. https://t.co/eIjLfEYZCu

In the case’s affidavit, the prosecutor provided the stories of eight people who have been negatively affected by Mugshots.com. Jesse T., who was arrested in 2013 but released without charges filed, applied for over 100 jobs with no response after his mugshot surfaced on the website. Mugshots.com wanted $399 from him to remove it and when he told them it was illegal, they called him a “fucking bitch” on the phone.

Rosa S.’s husband was jailed for one night and released with no charges in 1998. In 2002, he committed suicide. Her son shares the same name as his father and when they Google the name, her late husband’s mugshot comes up. When she called Mugshots.com to have it removed and explained that the posting was painful for her children, she was told she would have to pay $399.