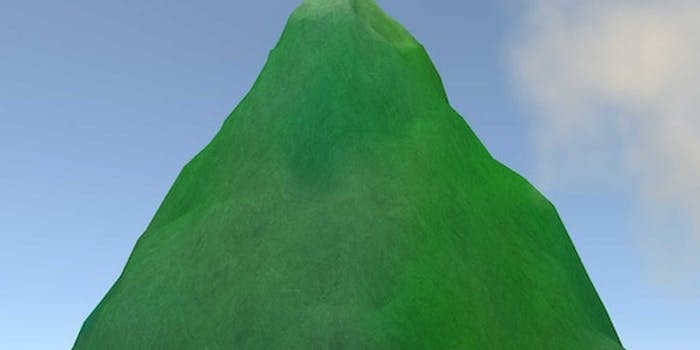 Games like MTN are just an exercise in watching—and maybe a meditation assistant?

By now, there is a simulator for everything.

A simulator is a video game meant to offer as realistic an experience as possible. Flight simulators put you in the sky and train simulators put you on the tracks. Countless simulator games exist, many of which have been created in a strange genre boom over the last few years.

Now, for your inexplicable pleasure, there is a new simulator to “play”: MTN, a mountain simulator for iOS.

In this game, predictably, you’re a mountain.

Following in the footsteps of Grass Simulator and Rock Simulator, MTN puts you in the position of an immobile landscape in which your chief activity is watching.

To start, you draw your mountain. Then, you watch for 50 hours as the universe carries on and your mountain simply exists. Quotes can pop up (“I adore this quiet evening”), but there is no goal or gameplay beyond simply having and seeing a mountain.

“The idea is to keep it running in the background while you do other things,” developer David O’Reilly told iDownloadBlog. Simulators are getting exceedingly weird. Games like MTN are just an exercise in watching—and maybe a meditation assistant?— and games like the Simulator Simulator have folded the genre in on itself.

What I’m trying to say is, if you’ve ever wanted to look at a poorly rendered mountain for 50 hours, your day has finally arrived.