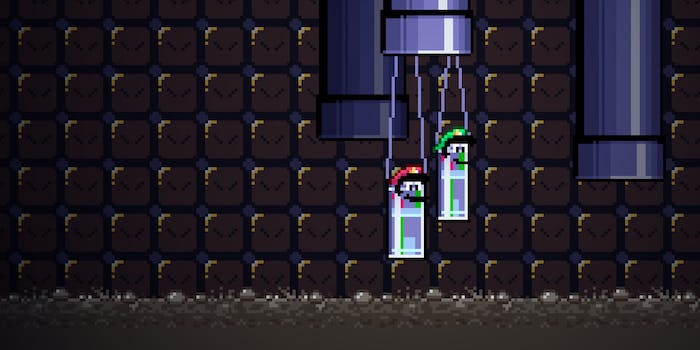 These bots are about to get into some deep sh*t.

Mario and Luigi were plumbers by trade, but most of their work involved defeating Bowser and saving Princess Peach. Now, two robots named after the video game heroes are preparing to do the dirty work the animated brothers never did.

Researchers at the Massachusetts Institute of Technology (MIT) are sending their robotic reboots of the beloved Nintendo brethren down the pipes and into the sewers. There, Mario and Luigi will forgo the mushrooms and coins and instead collect the muck that flows through the bowels of the city.

The robots are part of the Underworlds project, an initiative to take a closer look at the often overlooked sewage that runs just below our feet. Launched by MIT last year, the Underworlds project sees waste as anything but; the team is confident that the material is an untapped resource with much to teach about human health.

To understand why one would want to wade into the waste carried through the sewers, it’s important to first understand just how important the waste management systems are to our everyday lives.

Often reduced to being the subject of potty humor, the pipes of plumbing have saved more lives than we could possibly count. While everybody poops, not everybody does so into a toilet that takes the waste far away from them. Developed countries that have water and sanitation systems essentially eliminated diseases like cholera and typhoid—and the sometimes fatal results that come with them—from the population in the process by severely limiting exposure to human waste.

In developing nations that don’t have such a luxury, poop isn’t something to joke about; exposure to fecal matter leads to the death of 2.2 million children and infants each year. According to Water.org, 2.5 billion people lack access to sufficient sanitation systems, and 1.2 billion people have no facilities whatsoever. As a result, the majority of the illness in the world is caused by fecal matter.

The sewers don’t eliminate waste and disease on their own, but rather contain it until it can be properly treated and dealt with. It’s a simple but incredibly important system that benefits the overall health of a population—and to the scientists at MIT, it’s also an untapped pipeline of data.

“Authorities regularly sample and analyze sewage in municipal plants, before it is treated and reintroduced into the environment. However, the goal of such sampling is simply to monitor chemical and biological residuals,” Carlo Ratti,the director of the Senseable City Lab at MIT and principle investigator on the Underworlds project, told the Daily Dot.

Ratti and his team have a different approach: they plan to extensively monitor sewage in order to better understand human health. This means going further than previous studies, which have examined wastewater once it has arrived at a treatment plant. The Underworlds team will take samples from a city’s residential sectors, before it ever reaches its final destination. 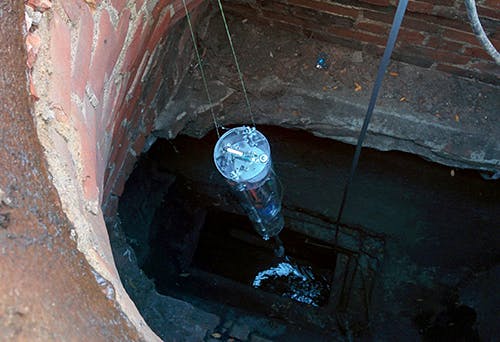 By moving the sampling process upstream to residential sectors of the city, the researchers are able to mark the wastewater contents to specific regions with geotagging, as well as minimize deterioration by moving closer to the waste’s origin.

The waste can provide surprisingly detailed results; Ratti and his team have been able to identify common drugs like Advil and Tylenol, as well as chemicals like nicotine. They have even been able to determine the top 10 plant-based foods consumed by people in a given region. It’s the type of information that could tip off indicators for diseases like diabetes and lead to more targeted health solutions to afflictions of a certain area.

In practice, it’s not all that different from the data mining performed by services like Google or Facebook, which sift through incredible streams of data produced by online activity—often anonymized but specific enough to assess trends and probabilities—to surface everything from targeted advertising to news and topics that might be of interest to you.

Fittingly, like the digital spiders that crawl the websites for Google, the process of gathering data for the Underworlds project will be handled by robots. Mario and Luigi are new additions to the team; prior to their creation, Ratti said the team did the sampling by hand—a process that can be costly and time consuming. “We discovered that that was not fun, and we started developing the robots.” 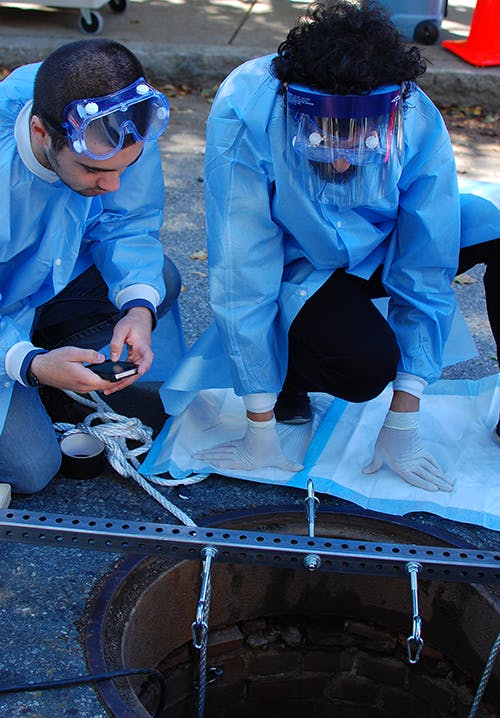 Ratti explained that each Mario (the initial prototype) and Luigi (the thinner second build) unit are equipped with a motion system and filtration system. The motion system controls the movement of the unit, dropping it from street level into the wastewater below and bringing it back to the surface after sampling. Meanwhile, the filtration system captures bacteria and expels water from sample.

The entire collection process takes between five to 60 minutes. Once collected, the sample is sent to a lab for testing “to determine the species and abundance of bacteria in the sewage.”

According to Ratti, the current versions of Mario and Luigi are early stage prototypes that represent the “minimum viable product” to capture bacteria from wastewater. The next iterations of the devices will be like Mario and Luigi with power ups, designed to facilitate additional functions. Among the goals for the next variants including chemical and viral analysis, as well as the potential for real-time detection and communication to track and send readings as they occur.

Underworlds is still in its earliest stages, just months into what is a multi-year research plan. This summer, ten Mario and Luigi bots will descend into the sewer pipes of Cambridge and Boston to prove the concept. From there, it will expand its operations to Kuwait, where the team recently received a $4 million grant from the Kuwait Foundation for the Advancement of Sciences.

The major up-front investment Kuwait could be a model for others in the future, as it could present a considerable savings on the backend. According to Ratti, the largest cost associated with wastewater sampling is not the instrument itself but the sequencing process to analyze it. With a variety of robot models, the project can be adjusted based on the needs of a given region.

“If a community’s policy makers plan to adopt the platform, the first decision is which information to collect based on research aim and budget. A selection of  bacteria, virus, chemical, or a combination of each require different collection technology,” Ratti explained.

As cities continue to expand, the question of infrastructure is often raised—are systems and structures that have been in place for decades too outdated and rooted in the heart of communities to modernize them without starting fresh? The Underworlds project presents potential for creating a smarter, healthier city without tearing up the underlaying architecture. And once again, Mario and Luigi just may save the kingdom.