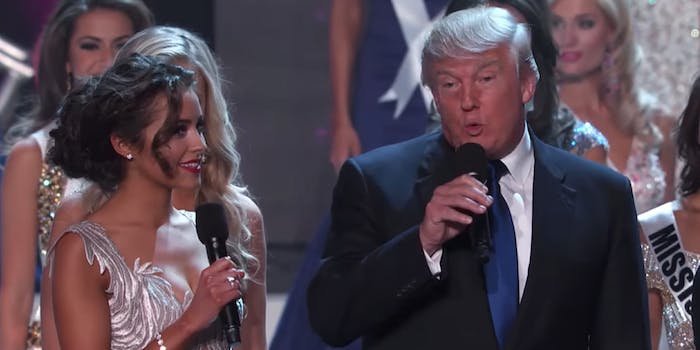 The fixes were in.

President Donald Trump reportedly rigged Miss Universe elections to go to women in countries where he had strong business ties, according to a new report from the New Yorker focusing on the 2013 Miss Universe pageant.

The story centers around the 2013 Miss Universe pageant, which was held in Moscow, and over which Trump presided. Although he has since sold the pageant, the president was a co-owner of Miss Universe at the time.

Several contestants told the New Yorker that they thought the contest was rigged, with Trump simply picking the women he wanted to win, who all happened to hail from countries he wanted or had business relationships with.

Adwoa Yamoah, who competed as Miss Canada in 2012, told me, “He made comments about every girl: ‘I’ve been to that country.’ ‘We’re building a Trump Tower there.’ It was clear the countries that he liked did well. He’d whisper to Paula about the girls, and she’d write it down. He basically told us he picked nine of the top fifteen.” Kerrie Baylis, who was Miss Jamaica in 2013, described a similar scene and added that, when the finalists were announced, “the list looked like the countries that Donald Trump did business with, or wanted to do business with.”

In 2013, the competition’s judges were shocked when none of their selections made it through, but Trump’s preferences did.

Trump had decided that year’s pageant should be in Moscow, a departure from the sunnier climes where the event had previously been held. Trump had visited the city several times, Toobin writes, “hoping to add one of his eponymous towers to the city’s skyline.” His plans have never materialized, but he stood to gain from making relationships there.

From there, Trump’s ties to what happened in 2016 seemed to have been cemented.

By 2013, Trump was a household name, after the success of The Apprentice. His forays into both real estate and showbusiness mirrored the trajectory of Russia’s Agalarov family, whose scion Aras made his fortune in real estate development and whose son Emin was a pop singer.

Trump made a deal with the Agalarov family to hold the Miss Universe pageant in Moscow that year. The pageant would be held on property belonging to them, and Emin would perform at the pageant in a bid to increase his global appeal. One of Emin’s music videos features Miss Universe 2012 Olivia Culpo. Another featured Miss Universe 2013 contestants, and Trump himself, delivering his signature line: ”You’re fired!”

Trump also hoped that his relationship to the Agalarovs would provide a meeting with Putin. After announcing that the pageant would be in Russia, Trump tweeted, “Do you think Putin will be going to The Miss Universe Pageant in November in Moscow—if so, will he become my new best friend?”

Since the 2013 Miss Universe pageant, Trump has kept in touch with the Agalarov family and has continued kowtowing to Putin and Russian interests. In 2015, while a presidential candidate, he was also still trying to build in Moscow, even going so far as to sign a letter of intent to license the Trump name to a proposed office tower in the city. Felix Sater, an investor in Trump properties and convicted criminal with ties to the Russian mob, proposed the deal.

“I will get Putin on this program and we will get Donald elected. . . . Buddy our boy can become President of the USA and we can engineer it. I will get all of Putins team to buy in on this.”

Although the real estate deal fell through, Sater’s prediction didn’t.