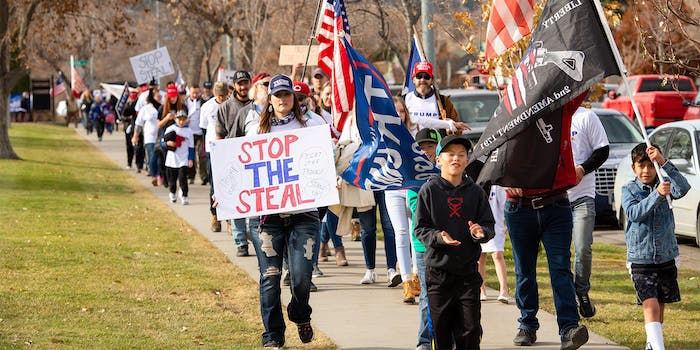 What you need to know about the menagerie of MAGA descending on D.C.

It's everyone in the far-right.

Far-right characters, white nationalists, hate groups, and supporters of President Donald Trump are slated to arrive in Washington, D.C. on Saturday morning to partake in a joint rally, which currently has yet to settle on a name, alternating between the “Million MAGA March,” “Stop the Steal,” and the “March for Trump.”

While the marches have three different names, they are all set to occur in DC’s Freedom Plaza at noon on Saturday, which is across the White House.

Attendees, who have boasted in online forums about attending the gathering, range from far-right militia groups to neo-Nazis and everything in-between.

Members of militia groups the Oath Keepers and the Three Percenters have claimed they will attend the rally, while the Oath Keepers leader Stewart Rhodes boasted Thursday on InfoWars that members will be stationed outside of Washington, D.C. with firearms in the case that President Donald Trump orders them to take action.

White nationalist Groyper leader Nick Fuentes has also touted online that a large group of his “Groyper Army” will take to the streets of D.C. to protest alleged “ballot fraud.” Hate group leader Patrick Casey, a fellow Groyper, will also be in attendance at the rally.

“GROYPERS ARE GOING TO STOP THIS COUP!” Fuentes posted on Telegram earlier this week.

QAnon supporters will undoubtedly be among the ranks. The far-right hate group the Proud Boys, who have threatened to take action over President-elect Joe Biden’s win, are also set to appear at the rally,

Right-wing troll Ali Alexander has helped to organize the “Stop the Steal” campaign, as reported by Right Wing Watch.

That said, it’s not only the extreme far-right promoting the marches: Fox News hosts Sean Hannity and Laura Ingraham have been promoting the pro-Trump march on their Twitter pages.

On Twitter, Trump himself teased that he may swing by the rally.

The Daily Dot will be in attendance covering the rally on Saturday and you can follow along here on Twitter.