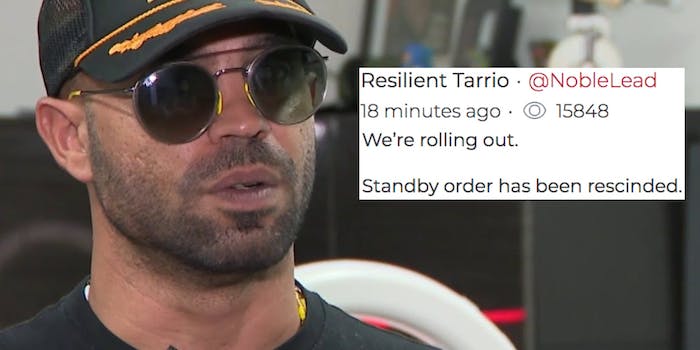 'We're rolling out,' the group's leader said. 'Standby order has been rescinded.'

The far-right Proud Boys group has threatened to take action after Democratic candidate Joe Biden was projected to win the 2020 election.

In a Saturday post on Parler, an alternative social media site used by conservatives, Proud Boys leader Enrique Tarrio seemingly called on members of the group to rise up in defense of President Donald Trump.

“We’re rolling out,” Tarrio said. “Standby order has been rescinded.”

Tarrio’s statement refers to remarks made by Trump during the first presidential debate in September in which he called on the Proud Boys to “stand back and standby” after being asked to condemn the group.

The Proud Boys immediately adopted the phrase as their own and took it as an endorsement by the president.

While Tarrio’s statement is vague, his followers on Parler have begun calling for violence over the false claims that Trump lost the election due to widespread voter fraud.

“I want in!” one user said in a poorly-worded response. “I have a job, a family and ready to die to fucking end democrats communist.”

After news of the commentary began gaining attention online, Tarrio came out and denied that he was calling for his members to engage in violence.

“Lol media has already taken my previous statement and turned it into some type of call for violence,” Tarrio said. “This is how they make protesting illegal.”

But even as Tarrio alleged that the group wasn’t calling for violence, commenters continued to flood his posts with incendiary remarks.

“LOCKED & LOADED! HEADKNG [sic] TO ELECTIONS OFFICE IN LAS VEGAS!” Parler user @SONSofTHUNDER3113 said. “WE WILL NEVER CONCEDE TO FRAUD! WE WILL PROTECT PATRIOTS BY ALL MEANS NECESSARY!”

Although some users are calling for calm over the false belief that Biden’s win will be overturned in court, it still remains unclear whether any coordinated action will be taken by the group.