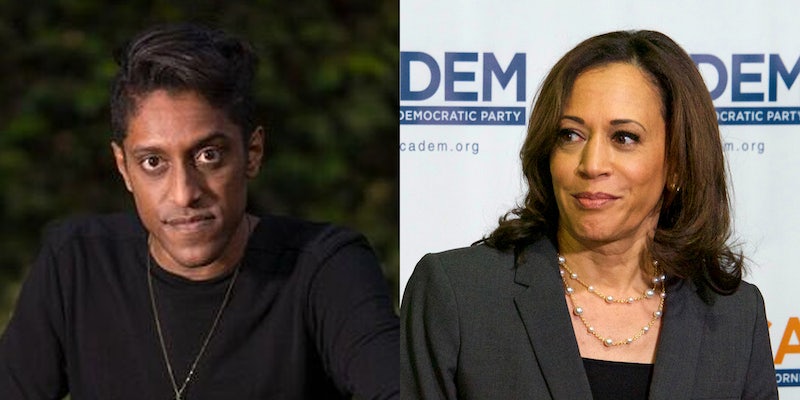 Ali Alexander wants you to look into Kamala Harris' history. His own? Not so much.

Alexander is a Trumpworld denizen and member of the far-right, with an outsized ego and unshakable faith in his influence in the political world.

“I took down Kamala Harris in the primary,” Alexander says in his Twitter bio now, which he updated after Harris was picked by former Vice President Joe Biden to be his running mate.

Last night, as Harris gave her acceptance speech to be Biden’s VP, Ali declared: “I won.”

The smear campaign that Alexander credits himself with ending Harris’ own presidential bid began in June 2019 and garnered mainstream attention. In it, he said of Sen. Harris (D-Calif.): “she’s not an American Black. Period.”

It was a claim that went viral in the far-right Twittersphere, eventually even retweeted by Donald Trump Jr.

Trump Jr. later took down the tweet and a spokesperson claimed his retweeting the message was all a “misunderstanding.”

Last week, the far-right pundit doubled down on his baseless claims. Alexander went on a rant on Periscope warning about the knowledge he has on Harris not being a Black American.

“Joe Biden, his private investigators … has to know what I know, about her [Kamala Harris’] father’s family. They have to know about what her father has told other people,” Alexander stated.

After dropping such claims about “private investigators,” Alexander failed to give any further specifics about what he knows about Harris’ family. The far-right troll then appeared to reason Harris’ isn’t Black by stating that she didn’t “suffer from Jim Crow [laws].”

That claim made by the pundit is false, as Harris, during the second 2020 Democratic presidential debate, spoke about how bussing impacted her early childhood.

He added, “Kamala Harris is one of the few Brown people in all of America to be slave owners on both sides [of her family].”

Alexander then went on about how “viral” his original tweet was before he claimed that “people were trying to kill him,” scampering off to put on on a bulletproof vest.

Alexander could also be seen in the Periscope holding up a gold-framed photo of his original tweet and kissing it.

Known by the three-character handle on Twitter, @Ali, Alexander is a pro-Trump voice who bills himself as a “Christian,” but who isn’t afraid of spreading misinformation, breaking the law, and calling women slurs.

He now spends his time grifting around in far right-wing circles, claiming to jet-set around the country, and appearing on far-right podcasts such as on Proud Boys founder Gavin McInnes’ show.

Alexander was also part of the team that launched a right-wing tabloid, Culttture, in which a skeleton team of writers frequently wrote articles praising the owners of the site’s tweets and video. (More recently the site has paused in producing content.)

The tabloid isn’t the 34-year-old’s first work with publishing, as he was the CEO of the “National Bloggers Club, Inc.” which he claimed to be a non-profit, but which he never registered with the IRS.

But for someone who harps so much on Harris’ identity, Alexander himself has made some changes. Previously, he went by Ali Akbar. And a search of that named shows he was found guilty on several charges to prior changing his name.

Alexander did not respond to the Daily Dot’s multiple requests for comment and inquiry for an interview for this story. (Alexander did block this reporter on Twitter.)

In his new life, Alexander hasn’t publicly spoken about his past and didn’t respond to questions on the matter.

Alexander, a fringe far-right political operative, has found a niche among the likes of anti-Muslim activist and Republican Florida congressional candidate Laura Loomer and blundering political fraudster Jacob Wohl. (Friendly to those on the far-right, Alexander has been critical of conservative commentators such as Ben Shapiro, even going as far to state that Shapiro “hates Christians.”)

The trio went to Minneapolis in June 2019 to film a documentary called Importing Ilhan, which was severely mocked online for lacking credibility. The video they produced was aimed at proving Rep. Ilhan Omar (D-Minn.) had married her brother.

While filming, they also wore bulletproof jackets only to turn out to report fake death threats against themselves to authorities.

Ali is an avowed Christian and makes his faith a prominent part of his online persona. Yet in since-deleted tweets, he had a tendency to single out members of the media for being Jewish. Alexander also has a propensity online to call woman slurs.

Alexander went on a 20-minute-long, profanity-laced rant against Tiana Lowe, a Washington Examiner opinion columnist and her “libertarian views” while using degrading remarks for her physical appearance.

“We Christians and conservatives are being punked by thots and skanks, look at her profile picture. She’s [Lowe] wearing this short skirt that is completely inappropriate because she wants to be on Fox News,” Alexander said.”

Alexander continued to go after Lowe by calling her a “low IQ thot erew (sic)” while adding he believes she looks like she was “run over by a train.”

Alexander, more recently, has turned to make his money by riding the coattails and billing himself to his fans as an advisor to music icon tuned 2020 presidential hopeful Kanye West.

The pundit frequently hedges his bets on making the illusion to his fans of serving as a faux spokesperson for West and a go-between for the rapper and President Trump. (Alexander according to public information, doesn’t work for West.)

While Ali prides himself on having taken Harris out of the race, there’s only one problem with that narrative. He posted it in June 2019. Harris didn’t drop out until six months later, in December.

But, as you can see, properly recalling the past isn’t something Alexander is all that interested in.