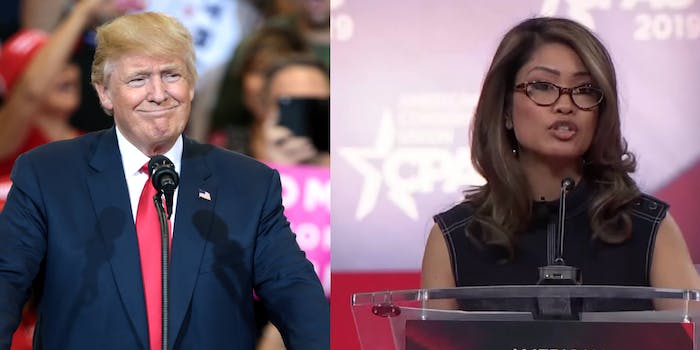 White nationalist Groypers are taking Trump’s retweet as an endorsement

A tweet President Donald Trump sent out on Saturday is leading “Groypers” to believe he’s endorsing their movement.

Trump quote-tweeted a clip of far-right columnist Michelle Malkin giving a speech. In her speech, Malkin complains about there not being “safe spaces” on social media for conservatives.

“The Radical Left is in total command & control of Facebook, Instagram, Twitter, and Google. The Administration is working to remedy this illegal situation. Stay tuned, and send names & events. Thank you, Michelle!” Trump wrote in response to the clip.

The clip of Malkin was posted to by the America First Clips Twitter account. The account is associated with 21-year-old white nationalist Nicholas Fuentes. As Jared Holt pointed out on Twitter, Malkin has “suffered professional fallout for her defense of” Fuentes, who is a Holocaust denier.

And Fuentes appears to be rather proud Trump is taking note of the account.

“Six months ago Michelle Malkin was ‘cancelled’ because she refused to disavow me after I was blacklisted by Con Inc.,” Fuentes tweeted. “Yesterday the President retweeted a video of Malkin posted by an America First clips channel.”

He included a photo of the Groypers’ chosen mascot, an exploitable illustration of Pepe the Frog. (Groypers are members of Fuentes’ alt-right white nationalism movement.)

“This potentially goes to show that people can associate with us, and defend us, and not be totally blackballed from society and right-wing politics more exclusively,” Casey stated.

America First Clips’ tweet appears to have been deleted by the user of the account. Yet, far-right activist Laura Loomer quickly dubbed the deletion “tech censorship.”

“Twitter just banned the clip of Michelle Malkin talking about tech censorship that President Trump tweeted today,” Loomer wrote on Telegram. Malkin even claimed “the gatekeepers keep PROVING US RIGHT,” asking in a follow-up, “What are they so afraid of?”

The Daily Dot has reached out to Fuentes.