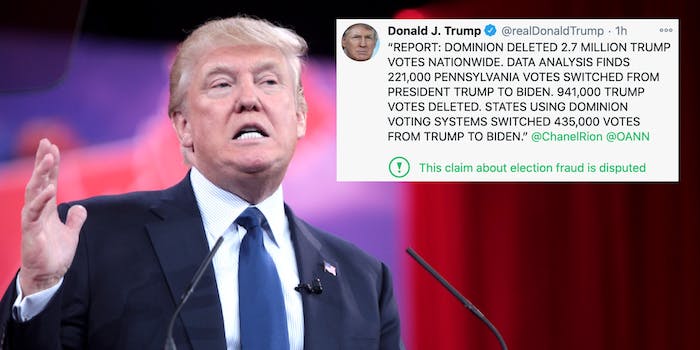 Here's how the debunked conspiracy made its way to the president's Twitter.

A conspiracy theory about widespread voter fraud has been amplified by President Donald Trump despite being debunked more than a week ago.

In a tweet on Thursday, Trump, who lost the 2020 election last week, asserted that President-elect Joe Biden’s victory was enabled by ballot-counting software produced by Dominion Voting Systems.

Citing Chanel Rion, a reporter for the conspiratorial One America News Network (OANN), Trump falsely asserted that 2.7 million votes had been stolen from him.

The conspiracy theory first began on Nov. 4 when officials in Antrim County, Michigan, announced that they had discovered an error that initially showed Biden defeating Trump by a few thousand votes.

The error was produced after election officials inadvertently configured Dominion’s ballot scanners and reporting software with two different versions of the ballot.

In a statement on Facebook, the officials noted that the votes had been accurately counted but that the software had reported the total incorrectly. At no point were any actual votes switched or altered due to the issue.

The officials were able to quickly fix the problem and after recounting the ballots, the reported results correctly reflected the vote numbers showing a Trump victory.

The minor error went largely unnoticed until Laura Cox, the chair of the Michigan Republican Party, alleged during a Nov. 6 press conference that the issue likely occurred in other counties that relied on Dominion.

Since then, the conspiracy has taken on a life of its own, with conservative internet users concocting theories left and right in an effort to bolster Trump’s false claims that the election was rigged.

Trump supporters began suggesting on popular far-right forums such as 8kun, formerly known as 8chan, and thedonald.win that the software likely took millions of votes from the president.

Dominion Voting Systems released a fact-check of its own refuting the countless conspiracies surrounding their machines and software.

“Dominion Voting Systems categorically denies any claims about any vote switching or alleged software issues with our voting systems,” the company said.

Trump’s latest allegations can be traced back to Ron Watkins, the former administrator of 8chan and 8kun, who asserted on Twitter Wednesday that he had shared his research on Dominion with OANN.

Watkins was likely contacted due to a Twitter thread he created on Wednesday outlining alleged issues with Dominion. The thread, however, did not include any evidence whatsoever to support claims of voter fraud. Watkins, and his father, Jim have long been speculated as the people currently behind QAnon.

The current conspiracies regarding Dominion are just one of at least 40 different false allegations made by the Trump Administration and its supporters since Election Day, according to BuzzFeed News.

Trump’s latest tweet comes amid his desperate attempts to overturn the results of the 2020 election by filing a series of lawsuits across the country. Despite the president’s wild claims, his own lawyers have repeatedly admitted in court that they have obtained no actual evidence of widespread fraud.