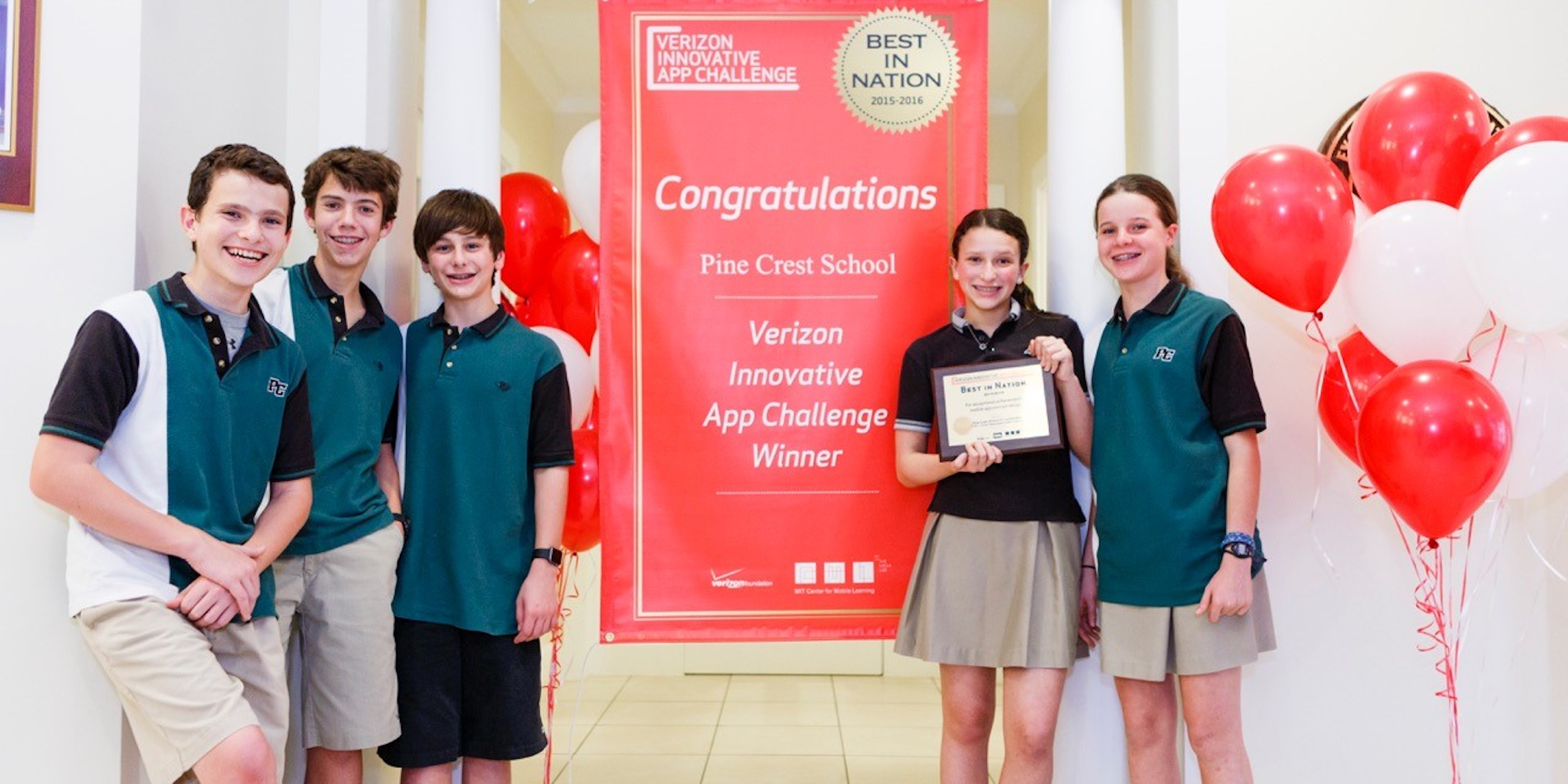 The impact of concussions and brain injuries on professional athletes is just starting to be widely publicized. For youth players who don’t have the benefit of top-of-the-line equipment and medical treatment, the dangers are even higher and less reported.

There may not be a way to completely eliminate concussions from sports, but a group of seventh graders from Pine Crest School in Fort Lauderdale, Florida, have developed a way to make sure those injuries don’t go unnoticed and unchecked.

The students, Trey Santarelli, Chase O’Brien, John Kolettis, Jordan Shiff, and M.E. Gabrielle, developed a helmet accessory that uses built-in sensors to measure the impact of a hit and transmits the data in real-time to a connected smartphone or computer.

Under the guidance of their teacher-advisor and the school’s innovation specialist Keri Kolettis, the student assembled a prototype of the device, which they call the Force Transmission Data Collector (FTDC).

The idea behind the system is simple: place the sensor inside the helmet of each player and it will act as an alert system to track hits and jolts that may trigger a head injury.

“We would like to coordinate it with other standard concussion systems being used now,” John Kolettis told the Daily Dot. “Coordinating it with that, as well as getting more accurate numbers.”

O’Brien added that the FTDC wasn’t designed to replace any current concussion treatment protocols, but rather is used to simply detect force and impact. By acting as an alarm system that will alert coaches and parents to a player experiencing possible head trauma, the technology could prevent concussions and injuries that would otherwise be missed or ignored.

Earlier this month, the group’s invention won the Verizon Innovative App Challenge, which brought a $20,000 grant for their school and will give the students the opportunity to work with experts from the Massachusetts Institute of Technology (MIT) to make their concept a reality. 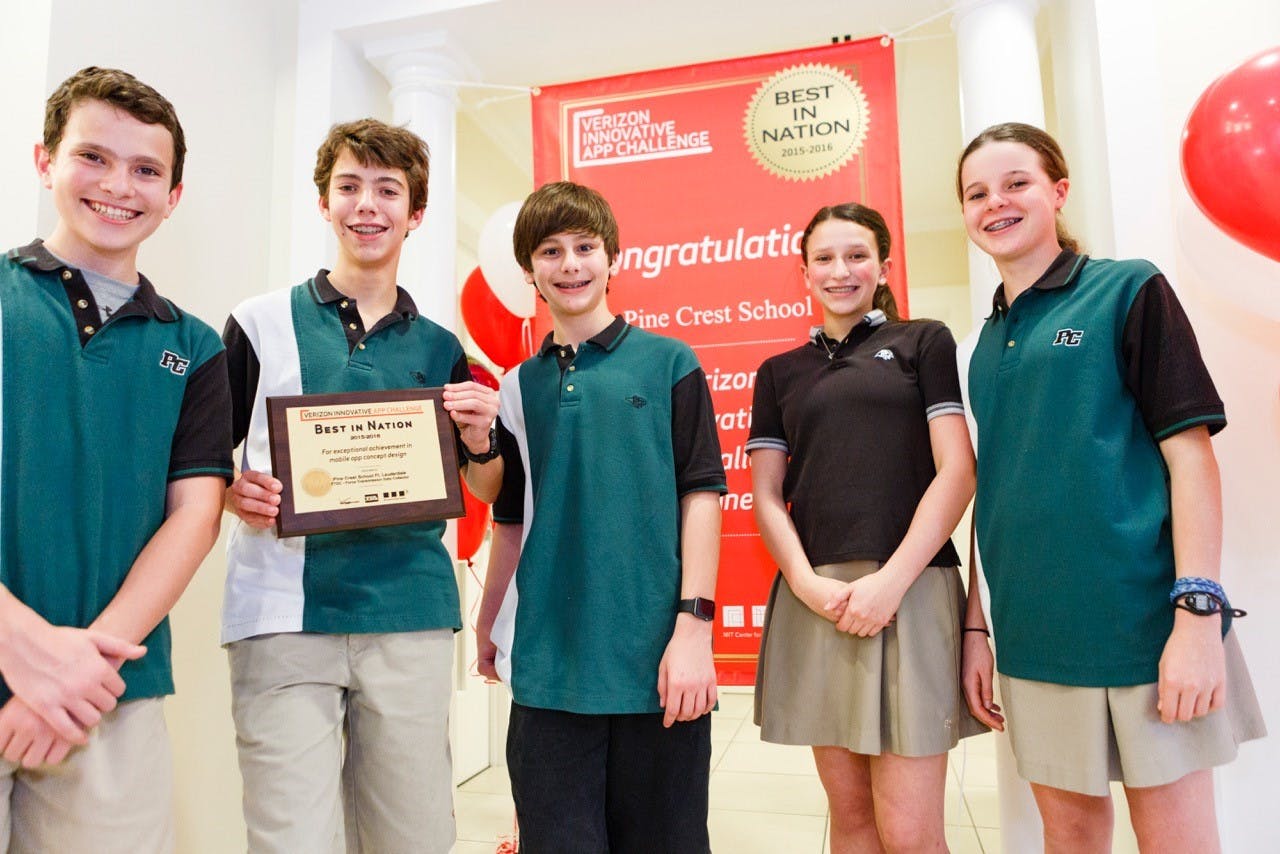 The team was inspired by the rash of head injuries taking place in athletics. The NFL saw a rise in concussions in 2015, jumping by 58 percent to 182 reported accounts. But it was the damaging effects in peers that caught the group’s attention.

“We had three high school football players [around the country] who all died in one month from concussions or something related to concussions,” O’Brien said. “I think that was something that really motivated us.”

The issue is present at all levels of competition; participants are set on playing and will intentionally downplay or hide injuries. Coaches, likewise, are guilty of setting aside health concerns of an individual.

“We’d like to have multiple helmets on multiple devices so the coach can see all the players, but then that same player can also appear on a parent’s phone so the parent can always check in and say, ‘Hey, my kid has a concussion, I can go down and check him out,'” he explained.

This is an especially important tool for middle- and high-school students who experience many of the risks of contact sports without the necessary medical staff on hand to diagnose and treat head injuries.

According to a 2012 study published in the American Academy of Pediatrics National Conference, eight times more concussions were diagnosed in girls’ high school soccer and 4.5 times more in girls’ basketball in high schools with certified athletic trainers than those without them.

While the presence of athletic trainers can make a huge difference in health outcomes for youth sports, they often are not present. In 2014, the National Athletic Trainers’ Association (NATA) reported that only 55 percent of high school athletes have access to a full-time athletic trainer.

“It actually takes high- and middle school athletes a lot longer to recover from the concussions than it does for professional athletes. So especially for them, they receive major damage and if they receive it again it’s going to be much more catastrophic than it would be for an NFL player,” explained O’Brien.

A system like FTDC won’t mitigate the need for full-time athletic training and health professionals, but it will help make the job of monitoring each player much more manageable, even for a small staff.

While football is the primary focus of the Pine Crest School students, Gabrielle said the device could be used in a variety of different situations. “Our hardware could go in any type of helmet because all you have to do is put the sensors in—it’s not fitted for just one type of helmet,” she said.

That should come as a relief to parents of active kids, regardless of what they partake in, be it a competitive sport like football or just riding bikes—the activity responsible for the most concussions in kids under the age of 14, according to a study conducted by the American Association of Neurological Surgeons.

Where the FTDC presents a particularly interesting application is not just in catching the hits with particularly high force, but in tracking the accruing impact of the smaller hits over time.

The University of Rochester Medical Center found that it’s not the big, eye-catching hits that do the most damage to an athlete, but rather the smaller blows taken over the course of a season. Though only one concussion was reported by the small sample of athletes involved in the study, all involved in contact sports saw a significant impact on their brains compared to a control group.

A study from the University of Purdue seemed to confirm that concussions come over time more often than from jarring blows. Researchers tracked high school players over the course of two years and found, using impact sensors similar to the FTDC, that the totality of blows taken over the course of a season lead to head injuries, while a hit that gives a concussion is usually the last straw following accumulated damage.

“After receiving multiple hits, a player will be able to build up resistance and ignore the fact that they may have experienced a traumatic brain injury,” Kolettis said. “It’s the sub-concussive events that do the most damage.”

In the coming weeks, the Pine Crest kids will be working with experts at MIT to further develop their technology. An emphasis on wireless technology, making it possible to connect the device to phones and computers will be of emphasis.

The students also hope to be able to develop a clearer system for how hits are measured and tracked. “We’d like to relate this to the concussion tests that we have currently, so we’d like to relate the data so we would know like a certain number would be good for them to be taken out so they don’t get hurt even more,” O’Brien said.

The students also want to find a way to keep their creation affordable so it can be easily implemented into existing equipment and can be used in as widespread a manner as possible. “I think winning this challenge and getting to work with MIT, I think they can really help us develop that,” Kolettis said.

In the long term, the best way to combat concussions and brain injuries that plague contact sports is to invest in better equipment and a dedicated health staff. Tools like FTDC can factor into the equation, providing data that makes the decision-making process more analytical and lean more heavily toward protecting players from the longterm effects of injuries.

“It’s definitely going to be something that’s going to take a long time to complete,” Gabrielle admitted, but her team has a mission that is worth working for. “We need to make sure that it’s safe and can be relied on. We want to minimize the amount of instances that concussions are undetected.”