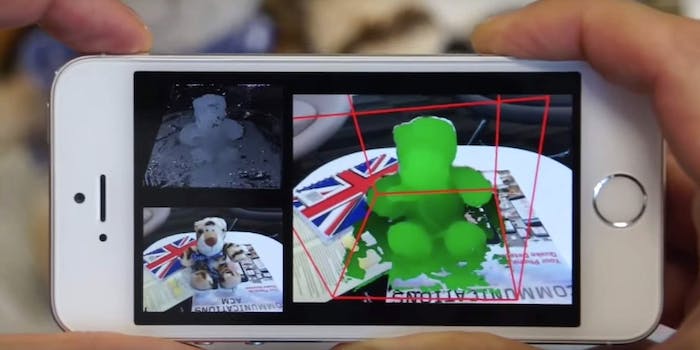 Microsoft wants to turn your smartphone into a 3D scanner

Your smartphone could soon be a 3D scanner.

Thanks to a new research project from Microsoft, your smartphone camera won’t just take regular, boring 2D pictures—it will soon be able to capture 3D images as well.

The project, dubbed MobileFusion, turns mobile phones into 3D scanners using just their built-in cameras—no extra hardware, or even an Internet connection, required. The resulting scan is of high enough quality that it can be used as for 3D printing and similar applications.

Interestingly, Microsoft used an iPhone 6, rather than a device running its own operating system, to built and implement MobileFusion. The company is now designing versions of the software for Android and Windows phones.

The possibilities for MobileFusion range from scanning a single household object to capturing one’s entire surroundings. Because the tool doesn’t require an Internet connection, it’s available to people in remote locations, be they adventurers climbing a mountain or scientists conducting research far from civilization.

Two of the lead researchers working on the MobileFusion project had previously worked on Kinect Fusion, a similar initiative that used the depth-sensing camera on the Xbox‘s Kinect peripheral to create 3D models.

Microsoft hasn’t announced a release date for consumer or developer versions of MobileFusion, but it is scheduled to present the software in October at the International Symposium on Mixed and Augmented Reality.