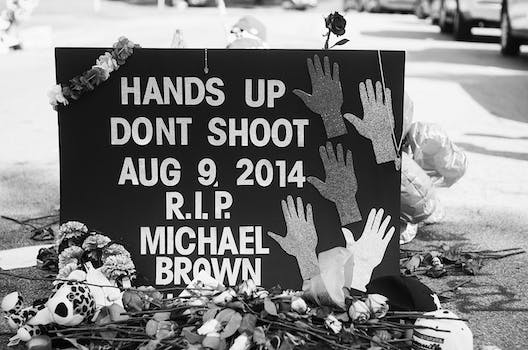 A cop called it a “pile of trash.” The city felt differently.

Late at night on Christmas Day, a car drove through the memorial in Ferguson, Mo., set up in the middle of Canfield Drive, the spot where Ferguson police officer Darren Wilson fatally shot unarmed black teenager Michael Brown.

Activists on the scene reportedly said the car intentionally drove through the memorial, which was composed of flowers, stuffed animals, and hand-written letters. Pictures of the damage show tire marks running over the items.

I can't believe some destroyed the Canfield memorial on Christmas. Hate is deep. (via @jay_myles2) pic.twitter.com/XumtQ23gMT

Just got to #MikeBrown memorial and it's been ran over. Someone who saw it on video said it was intentional. pic.twitter.com/UlR2TGSxCS

Ferguson Police Department spokesperson Timothy Zoll told the Washington Post in the morning that no crime had been reported, but that the department would be investigating. “I don’t know that a crime has occurred,” Zoll said. “But a pile of trash in the middle of the street? The Washington Post is making a call over this?”

Brown’s death, and the brutal police crackdown on the subsequent protests, attracted worldwide attention. When St. Louis County grand jury declined to indict Wilson for killing Brown, it sparked riots in cities across the country.

Soon after the memorial’s destruction, the call went out on social media and activists in the area quickly got to work rebuilding it. CBS St. Louis reports that, by 4am that morning, the memorial had been rebuilt.

Not surprised that so many people showed up to rebuild the memorial tonight but I'm still incredibly moved by the resilience & spirit.

This incident isn’t the first time that a memorial to Brown’s death has been damaged. In the first hours after the shooting, local police officers allowed a police dog to urinate on the memorial and then another cop drove over it in a police cruiser. A few weeks later, the memorial caught fire overnight.

In all cases, the memorial was quickly rebuilt.