Livestreaming isn't ready for everyday use.

It shouldn’t surprise anyone that livestreaming apps punish a smartphone’s battery life and data plan. But only when two very popular apps of that variety are launched is that fact realized.

Meerkat and Periscope have struck a chord. We’re being inundated with tweets linking us to camera feeds; or we’re on the other end, inviting viewers into our lives realtime. Livestreaming certainly predates these services (Ustream, anyone?) but the experience has never before been presented in a such fun, social, and easy-to-use way.

LIVE on #Periscope: I'm playing pictionary with YOU. Guess what I'm drawing! https://t.co/hA5Gs2Ptso

With Twitter snapping up Periscope (for an undisclosed sum before the company even launched) and Meerkat playing the plucky, eager competitor, it seems that the new normal will soon be to broadcast your actions to the world with video and sound. The livestreaming movement is upon us. But it’s still bumpy for now, and won’t look anything in the future like it does now. Josh Miller of Facebook’s product team explains why in a tweet:

Meerkat and Periscope users pay a “cost” in the wear and tear on their devices and the potentially grievous use of their data plans.

Your smartphone battery can only be charged and recharged so many times before it stops storing energy reliably. Just a five-minute Periscope stream was enough to knock my phone’s battery down 20 percent. This is no problem on a full charge, but the takeaway is clear: Your battery is not your friend when it comes to beaming yourself around the world.

These apps also require a data connection to work. If you’re connected to a Wi-Fi network, you can run wild and free without fear of overages—you aren’t being billed for those bytes being sent to livestreaming servers. But if you’re on your cellular connection without Wi-Fi in sight, perhaps broadcasting the traffic as you drive down I-95 or in a park without a wireless network, that data travels over the air and through your provider’s network. That’s tallied up against you.

For those of us still clinging to our unlimited data plans, that’s all well and good. But for the mass majority using metered data plans, there’s clearly a problem. Any time you’re feeding live video over the air to a server any distance away, you’re burning through bandwidth fairly quickly.

As an added kicker, once you finish your broadcast, Periscope will upload your recorded video to its own servers (unless you tell it not to), making your saved video available for playback for 24 hours. If that upload also takes place over the air, then you’re getting two-timed on your data: once for the broadcast itself, once for the upload.

I performed an unscientific experiment to get a sense of the rate at which Periscope uses your bandwidth. I checked this month’s data usage first: 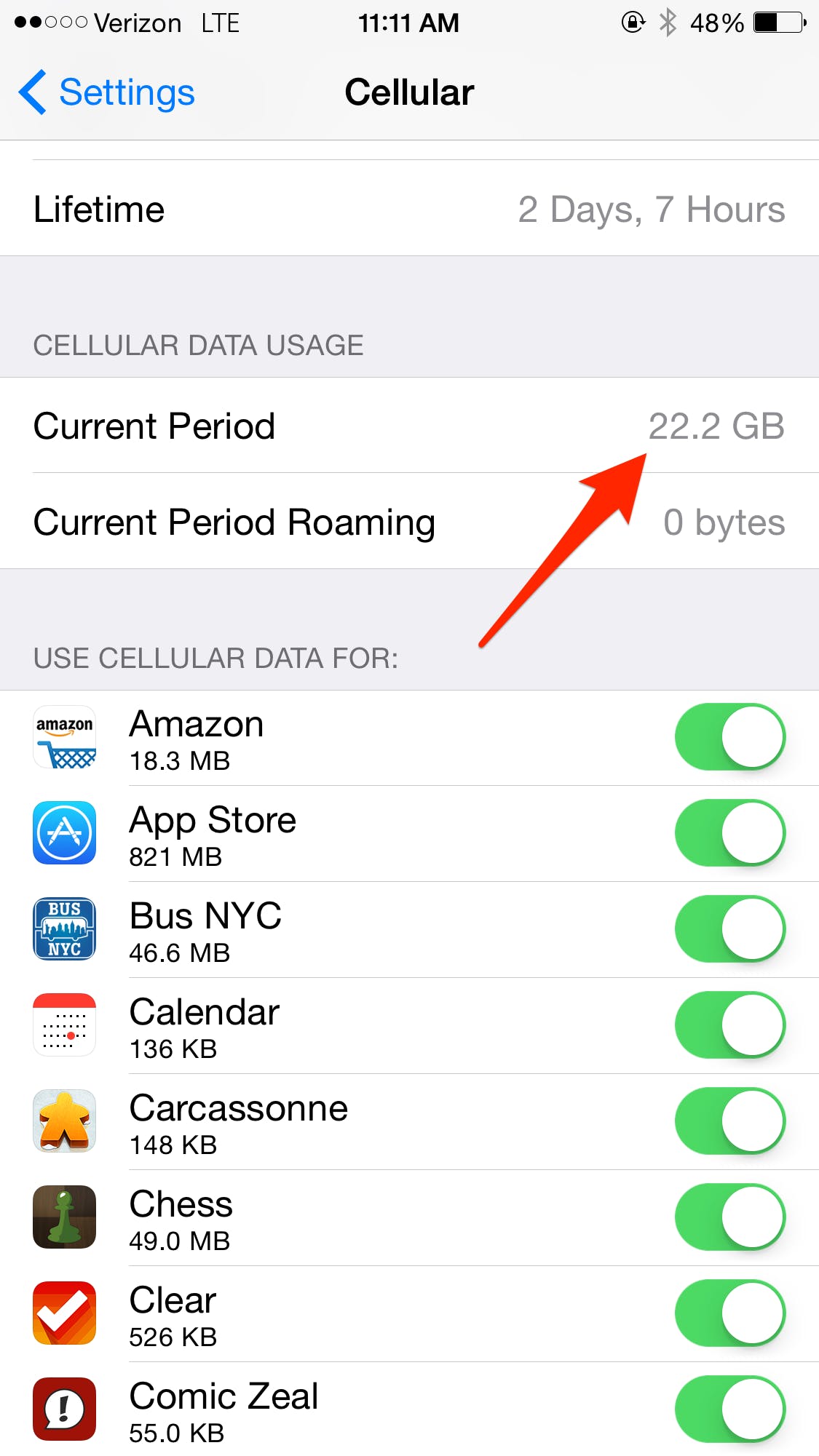 Then I started a livestream of the Daily Dot’s new office:

After broadcasting a three-minute walk around the kitchen and office, I checked my data again. I had used approximately 100 megabytes to let 44 strangers into my world.

This works out to a rough 33 MB per minute when you’re streaming through Periscope. At that rate, you could broadcast for a little over an hour before maxing out your 2 GB data plan. That might seem like a long time, certainly longer than you’d ever have cause to stream, but realize that everything you do off of Wi-Fi counts against your data. Emails, Spotify streams, the works.

The lesson is a simple one. If you love livestreaming, be sure to keep a close watch on data and battery usage. While the practice of sending your video and audio around the world is totally possible, it’s presently better left as a once-in-a-while novelty.

At least until data suck and battery life are better addressed, livestreaming as a social technology for casual users will face major challenges.