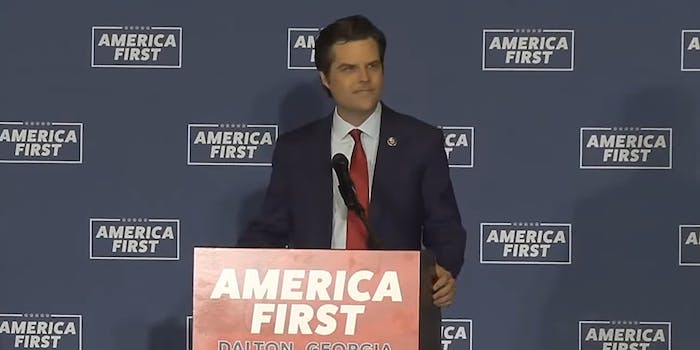 Florida congressman ramps up rhetoric as he faces federal investigation for sex trafficking.

Rep. Matt Gaetz (R-Fla.) held a rally with QAnon conspiracy theorist Rep. Marjorie Taylor Greene (R-Ga.) where he dug deep into the conservative playbook by railing against big tech companies. But his remarks are igniting criticism because some believe he was calling for violence against tech workers.

At Thursday night’s stop in Georgia on his tour with Greene, Gaetz, who is currently under federal investigation for trafficking a minor for sex—which he denies—spoke about “cancel” culture by tech giants before immediately pivoting to talking about having an “obligation” to use the Second Amendment.

Conservatives claim that they’re unfairly targeted by platforms, largely because many conservatives, including former President Donald Trump, have been suspended for violating policies prohibiting bigotry, disinformation, and calls for violence.

“Let us use the Constitution to strengthen our argument, and our movement. We have a First Amendment right to speak and assemble, and we better use it. The internet’s hall monitors out in Silicon Valley, they think they can suppress us, discourage us,” Gaetz, who has 1.3 million and 1 million Twitter followers on his two verified accounts, said. “Maybe if you’re just a little less patriotic, maybe if you just conform to their way of thinking a little more, then you’ll be allowed to participate in the digital world. But you know what? Silicon Valley can’t cancel this movement, or this rally, or this congressman.”

Gatez paused for applause and continued almost immediately: “We have a Second Amendment in this country and I think we have an obligation to use it.” He then went on to talk about the Second Amendment.

The clip, originally broadcast on Right Side Broadcasting Network was unearthed by Moms Demand founder Shannon Watts. It has 1.7 million views as of this writing. However, the clip lacks his remarks about the First Amendment beforehand and his elaboration on the Second Amendment afterward.

While Gaetz had brought up both the First Amendment and Second Amendment in his remarks, it is difficult to say whether or not he was referring specifically to tech workers being shot. If he didn’t it appears to be a clumsy attempt to discuss constitutional rights, or a deliberate attempt to rush into another portion of his speech.

Either way, his railing against “cancel” culture in Silicon Valley and immediately bringing up the Second Amendment was not met well online.

People accused Gaetz of violating his oath of office by inciting violence.

Others saw the comments as purely an offering of red meat to the gun-obsessed core of the Republican base.

“Just a collection of buzzwords to provoke the rubes,” opined one.

A few observers felt that Gaetz’s comments were particularly inappropriate because nine were killed in a mass shooting in San Jose, California the day prior. San Jose is only a few miles from Silicon Valley.

Gaetz isn’t the only Florida Republican with an ax to grind with tech companies.

On Monday, Gov. Ron DeSantis signed legislation that bans platforms from suspending political candidates, and subjects those that do so to heavy fines. On Thursday, two industry groups filed a widely expected lawsuit to block the legislation from taking effect.

DeSantis has not, however, suggested shooting tech workers.